September 01, 2017
So, it's September first!! Yay! And it's chilly and I'm wearing a sweater and feeling wonderfully cold. It's also a little cloudy and looks a bit yucky out, I wouldn't mind chilly and sunny, but I guess cloudy is alright. Anyways, here's my August wrap-up! 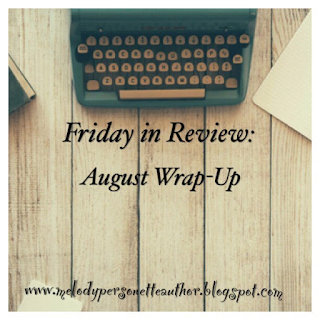 August Writing: So, this August I published my first short story collection. I'm insanely proud of the short stories I wrote throughout the beginning of this year and I think their some of my best writing so far. I published the e-book addition on Kindle of Of Magic and Mayhem on August 22 and there were some complications with the paperback, but it's now out this week on Amazon! I love that KDP lets you choose your own price cause Createspace made me put Weapon Icean up there for 12 dollars! So with KDP I could put the price way lower, since I know I don't like to pay tons of money for a book (by tons of money I mean ten dollars or higher and twelve dollars? That's just a bit crazy). You can find Of Magic and Mayhem on Kindle and paperback right HERE and as for my other writing, it's going pretty well. Slow. But good. When I wrote Golden I had one class and for the other half of the month I was on break so I could pretty much devote all the time I wanted into writing that book, which is why it only took a month to finish whereas with Silver I started writing it during the end of my break and I was having some physical problems that weren't fun and now classes have started. I know I'm only taking two classes, but classwork still takes up quite a bit of time. It's not like I have unlimited free time to just write, write, write. Plus, I've been working on publishing Of Magic and Mayhem and doing this blog thing.

Silver has opened a new door for me. I've always loved Science Fiction. I love Avatar and Guardians of the Galaxy and Transformers and Firefly and rocket boots. A few of my favorite books are Science Fiction and one of my favorite writers is Melissa Landers who writes YA Science Fiction and I've re-read Starflight a few times now. Weapon Icean was in the superhero genre, a teeny little part of the huge world of the Science Fiction genre and I loved writing it, but I've never written specific, for real YA Sci-Fi. Until Golden. Golden had aliens and spaceships and spacewalks and experimentation and cool gadgets. But the world in Golden is nothing compared to Silver. In Silver there's an entire alien planet that I'm writing in. It's called Zlatan and I've had to really stretch my worldbuilding muscles in creating that world. I've had to come up with alien words and a language and phrases and alien swears and a whole religion and sects of the religion and just like on Earth there are some who hate that religion and some who believe in one part of the religion but not the other. It's been fun and has made me really think about all the different angles of what religion is and the complexities of believing in a god or gods or deities and holy prophets and holy words and rituals and prophecies and extremists and anti-religious people on Zlatan and all that. Then there's the fashion and the customs and the weather and the scienc-y part of it all of why do the Celests have silver and gold skin and what would happen if a human was exposed to the extreme radiation of two suns instead of just one and what would the temperature be like with two suns and two moons and there's the architecture and cities and environment and how diverse do I want these people and this planet and these environments to be? It's all a lot, but it's been so much fun experimenting and realizing how much I really love creating a whole other alien world.

I also wrote a short story called The Lost Wildling and I published the first chapter HERE and will be publishing the second and third installment in the next two weeks. I'm also still working on Project Khione... November is coming up fast and I really need to be getting ready and figuring out what I'm going to be writing during Nanowrimo. I wanted to write the third book in the series this year, but I don't know if that's going to happen. Also, a writer friend of mine asked if I wanted to co-write a book and neither one of us has done that before so it's going to take some time, but I'm working on that too. So, it's a busy writing season and that's what I've been working on in August.

August Reading: I don't know if I would have been able get into the mindset of worldbuilding and creating a whole new race of people if I hadn't discovered Michael Buckley's fantasy YA series Undertow. I read all three books in the trilogy in five days. Undertow, Raging Sea and Heart of the Storm. I highly recommend the trilogy. Michael Buckley is amazing. When I was in middle school I loved his Sisters Grimm series and I still do, I reread it at least once a year and so it's really cool to be able to read another one of his works that's more age appropriate for me, a nineteen year old. At the beginning of August I also read The Phobia of Renegade X. I loved it and I thought Chelsea M. Campbell did a fantastic job with that one and it was just so fun. That series is the perfect mix of originality and cheesy in the superhero genre. So, yeah, those are the four books I've read this August. I got three more books from the library just a few days ago and I need to start on those soon.

August TV Shows: Did I mention, Defenders came out in August?! It was amazing, so I watched that (HERE is the link to my review of Defenders) and I'm still going through TVD and I've been rewatching Doctor Who. Just a few days ago I also started Being Human. It's one of my dad's favorite shows and has been urging me to watch it for like years now, cuz it's right up my alley. It's got vampires and werewolves and ghosts (I'm not a big fan of ghosts but I'll deal with it). So far, it's really good. A bit adult... a lot adult actually. I guess I am technically an adult at nineteen, but I like my teen drama and my TVD and Originals and Teen Wolf. The werewolves and vampires in those are a bit more tame. But Being Human is very good and very funny and I love! Aiden and Josh. They're great!

August Life Stuff: Ummm... classes started. Really, I can't remember what else in life that happened in August. Publishing a book was a big life thing... Hung out with friends... wrote... went to church... wrote some more... read... started classes. Yeah, August wasn't wildly busy or crazy, which was nice.

So yeah, that's pretty much how my August went down. I am very happy with myself for reading a whole four books throughout the month. At the beginning of the year I was in a big reading slump and now I've gained my reader confidence back. Writing has taken up a lot of time in a good way, and yeah... there ya go. August was real exciting and thrilling and full of adventure. ;)


Happy First Day of September!! I am ready for October and Halloween and Thanksgiving and Autumn leaves and pumpkins!
Have a great weekend everyone! ﻿