This page is for all my favorite things. Enjoy!
A few of my favorite authors are:
Shannon Messenger
Holly Black
Kiersten White
Stephanie Garber
Nadine Brandes
A.G. Howard
Stephanie Meyer
Ingrid Law
Rick Riordan
Michael Buckley
Lindsey Leavitt
Marissa Meyer
Sarah Prineas
And then there's also a list of my favorite TV Shows if you want to know them:


There are probably a hundred more but I can't remember them all. Those are the top few though.

(You're probably questioningly my sanity right now though so I think I'll just leave that list where it is.)
Also, I have a shorkie puppy (shitzu-yorkie mix) named Chessie and no he is not a girl (my family says that Chessie is a girl name). He is named after the Cheshire Cat (yes I am weird and named my dog after a cat) and he is my most favoritest thing ever. Here is a picture of him just so you can awww at him: 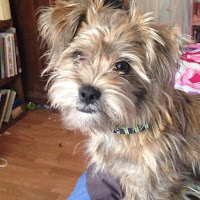 Isn't he adorable? He looks like a little stuffed animal! He can be very naughty and demanding and a bit of a spoiled brat from time to time but he's also super sweet and loves giving kisses and sleeping with me.


Some of my favorite books of all time are:

The Coldest Girl in Coldtown by Holly Black
Keeper of the Lost Cities series by Shannon Messenger
Let the Sky Fall series by Shannon Messenger
Vicious by V. E. Schwab
The Beautiful by Renee Ahdieh
Fawkes by Nadine Brandes
Caravel series by Stephanie Garber
Splintered by A.G. Howard
Pictures of Hollis Woods by Patricia Reilly Giff
Savvy, Scumble, and Switch by Ingrid Law
The Companion Quartet by Julia Golding
The Lunar Chronicals by Marissa Meyer
The Percy Jackson and the Olympians by Rick Riordan
The Sisters Grimm by Michael Buckley
Twilight by Stephanie Meyer

Anyone else love reading a train wreck? I find negative character arcs refreshing and fun to read and watch because not a lot of people do them. Like I'm a sucker for a redemption arc. I love characters that start out horrible and bad and "irredeemable" and then slowly redeem themselves and become the good guy. But from time to time I just love watching a good character go bad. Call me evil but I hope I'm not the only one who enjoys this. I've actually wanted to write this post for a while after rewatching Merlin last year and then over the past month me and a friend were rewatching Star Wars and I've always enjoyed the prequels because of Anakin's downward spiral. Also the last season of The 100, you watch as Octavia completes her journey to becoming one of the meanest, worst antagonists in the show. And that's saying something. The other day I really thought about what other characters who have negative arcs there are but I honestly couldn't th
4 comments
Read more

Happy Wednesday!  Did you know that Noah was a conspiracy theorist of his time? People thought he was crazy for building an Ark when there was no storm or rain or even a hint of a flood in sight! He suffered name calling, ridicule, shame and hatred because he was speaking out and following his Lord’s commands. I was reading through Hebrews the other day and under the section about faith Noah was there. In Hebrews there's an entire chapter - chapter 11 - called Faith in Action and the author lists one Old Testament character after another and their faith in God and what they did to put that faith into action. Near the top of that list is Noah. It says, "By faith Noah, when warned about things not yet seen, in holy fear built an ark to save his family. By his faith he condemned the world and became heir of the righteousness that is in keeping with faith." His faith in God was so great that he built an ark when God told him to as the rest of the world peered up at the
4 comments
Read more

Happy New Years everyone! 2019 is officially here! Some parts of last year felt like they went by so slowly while other parts feel like they were a blur. But overall, 2018 was a good year and I have a feeling 2019 will be a good year too. 2019 is a new season of life for me and others and I'm so excited to see what God has planned for myself, friends and family. I know I've already posted my goals for 2019 but there are a few more I want to add. Since writing the Looking Forward to 2019 post, I had a few epiphanies that I think are important. First of all, one of the authors I follow on Instagram wrote a post today about the difference between dreams and goals. Goals are achievable. They can be accomplished. Dreams can be too, but sometimes certain dreams are out of our control and when we fail to accomplish that dream, we fail. She said how she really wanted to sell a book in 2019. To pitch a book to her agent and get it out there. But that's not a goal. That's a
Post a Comment
Read more