After being injected with a serum that gives sixteen year old Delphi icy cold abilities, she is thrown into the world of the Protectors. The team of superheroes that watches over Amparo City and protect the world from enhanced criminals and villains. Soon after she wakes with her strange new powers, her world is flipped upside-down again.

Her parents and older brother are revealed as super-powered villains and a new dark organization rises from the shadows to enact their long awaited plan against the Protectors.
Can she trust the Protectors or the handsome, winged Eros and his sinister telepathic boss, Tremble, who believes the Protectors are prejudice against those who look different from "normal" Supers.

Maybe, for Delphi, fitting in and living up to impossible superhero standards is overrated.

You Can Buy It Here:
Ebook: Amazon.com
Read The First Five Chapters of Weapon Icean Here:
Wattpad
Goodreads (By clicking on Read Book under the book cover).

The pins that inspired Weapon Icean:


Of Magic and Mayhem

Of Magic and Mayhem is a collection of ten short stories. These stories have everything from vampires, to magic, to goblins, to ghosts. All of them tales of magic and love and danger and even a little darkness.

This collection will take you from the colorful, vibrant world of Avalon in Magic and Mayhem to a contemporary city where magic and mythic creature are the norm in Infinity, The Invisible Thief, and Knox. You get to know the undying love of two brothers in Of Moonlight and Tombstones, learn that sometimes love can be dangerous in the Pool of the Lost, and that love isn't always peaceful in Peace at Last. The Rain Boy and Sky-Crossed Lovers will break your heart and make you soar above the clouds with tales of grief, and monsters, and thunderstorms. Enter a valley of magic and darkness in The Lonely Child and meet a thief and a ghostly princess in The Wolf's Blessing.

Delve into the bite sized worlds in Of Magic and Mayhem and let these tales whisk you away to dangerous and enchanting places of the imagination. 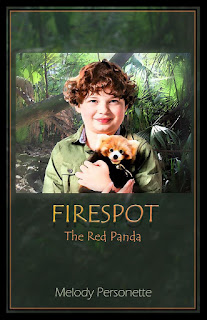 Thomas moved to Myanmar with his parents. When he and his parents go for a hike in the jungle, Thomas finds an injured baby red panda. Can Thomas and his family find a way to help this hurt orphan?

Happy New Years everyone! 2019 is officially here! Some parts of last year felt like they went by so slowly while other parts feel like they were a blur. But overall, 2018 was a good year and I have a feeling 2019 will be a good year too. 2019 is a new season of life for me and others and I'm so excited to see what God has planned for myself, friends and family.

Happy Wednesday!
Did you know that Noah was a conspiracy theorist of his time? People thought he was crazy for building an Ark when there was no storm or rain or even a hint of a flood in sight! He suffered name calling, ridicule, shame and hatred because he was speaking out and following his Lord’s commands. I was reading through Hebrews the other day and under the section about faith Noah was there. In Hebrews there's an entire chapter - chapter 11 - called Faith in Action and the author lists one Old Testament character after another and their faith in God and what they did to put that faith into action. Near the top of that list is Noah. It says, "By faith Noah, when warned about things not yet seen, in holy fear built an ark to save his family. By his faith he condemned the world and became heir of the righteousness that is in keeping with faith." His faith in God was so great that he built an ark when God told him to as the rest of the world peered up at the sky, s…
4 comments
Read more

Happy Friday! So, they awesome Lily Cat tagged me in this fictional vacation/would you rather challenge and I am so excited to do this. It sounds so fun!