Today's the day! I turn 23 and I couldn't think of a better way to celebrate than to share the cover for Golden Touch! I think this is by far my favorite cover my mom has ever done.

It's crazy to think that this time last year Golden Touch was still just a first draft and I was in the middle of writing book 2 of the series. A defining part of my twenty-second year will always be having revised Golden Touch and written almost the entire Archive Series. And now I get to open up my twenty-third year with sharing the cover and writing book the first draft of book 5, the very last book in the series. God is so good guys. I really think He gave me Golden Touch and this whole series a few months before the events of 2020 started. He gave me a story I could get lost in, I could find joy in even during some of the hardest times of the year. And now I get to share the cover and I get to close out the series and I just pray and hope that God will use Golden Touch and the series to give people the same joy and hope and escape that it gave me.

I'll save the sentimental words for the day when Golden Touch is actually released, but for now, here's the blurb and the cover!! 😆 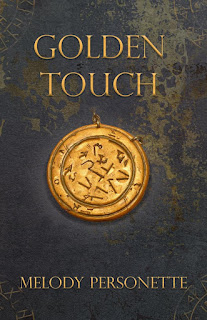 Amaya Wilson already thought her family was struggling to make ends meet when she comes home one night to find her father has lost his job. Hopelessness starts to settle in until her younger brother, Tyler, remembers a map and a story their grandfather used to tell them. A story of their ancestor who found and hid a Golden Gift up in the mountains.

Out of desperation to help their family get back on their feet, they head into the mountains with the newfound map guiding them, hoping to find the treasure he hid. What they find instead is not a pile of gold, but Darren, a boy who was put under a timeless sleep and has the ability to turn anything to gold with a touch of a finger.

But before the three of them can figure out what to do, they quickly discover there are people after Darren who believe he may be the key to a mystical book this mysterious group has been searching for.

All Amaya wanted to do was find some gold in the mountains to save her family, but what she got instead was a world of secret societies, supernatural abilities and a search for an ancient book that could make or break all of their futures.

What do you think??

I've always loved simplistic, artistic covers and have always wanted one for one of my books, so I was so excited to work with my mom to make one that I love so much. Her talent is always just so amazing in capturing the heart and essence of the story and I love that we have the pendant - a very important object in book 1 - on the front! And the little corner designs? Uph, just all the little details, I love it so much! 😍

So, yeah! There it is! The cover and the blurb and the release date... It's all coming together! 😆

July 15, 2020
Happy Wednesday!  Did you know that Noah was a conspiracy theorist of his time? People thought he was crazy for building an Ark when there was no storm or rain or even a hint of a flood in sight! He suffered name calling, ridicule, shame and hatred because he was speaking out and following his Lord’s commands. I was reading through Hebrews the other day and under the section about faith Noah was there. In Hebrews there's an entire chapter - chapter 11 - called Faith in Action and the author lists one Old Testament character after another and their faith in God and what they did to put that faith into action. Near the top of that list is Noah. It says, "By faith Noah, when warned about things not yet seen, in holy fear built an ark to save his family. By his faith he condemned the world and became heir of the righteousness that is in keeping with faith." His faith in God was so great that he built an ark when God told him to as the rest of the world peered up at the
4 comments
Read more