How to Write a Sequel 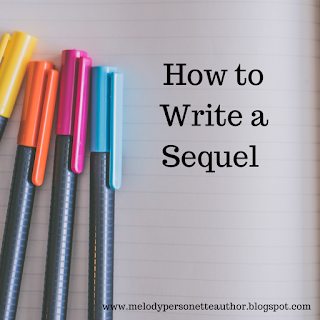 Hello everyone! Happy Wednesday! April is here at last and I'm so glad for it.

As I hit published on Cursed and decided to use this week to focus on Emerald Phantom, I realized that I've been drowning in sequels all March. Revising a sequel and writing one. Yesterday I published my second sequel.

Let me just tell you something, not to be a discouragement, but sequels are hard. I don't know about you, but I have a rough time with them. And though Emerald Phantom is going way smoother than Cursed did... it's still a trickier one to write than Golden Touch.

The thing is... I'm good at beginnings. I'm good at writing the beginnings of books and I fly through the beginning of a series, in other words, the first book in the series. But middles? Those are super hard for me, like they are for many writers. So writing the middle of a series A.K.A. the sequel? That's just as hard, if not harder because its not just the beginning of a book - it's a whole book! What helps me with writing the middle of a story is studying and using the three act structure. If all else fails, I find where my story is approximately at on that chart and plan the middle using that. But a sequel is different... I guess you could use the three act structure on a sequel, but to me it just doesn't feel right.

I've been doing a lot of research on sequels lately and thought I'd share my findings and what I've learned from writing my own sequels.

//1 It should be the same... but different. This one took me a while to figure out. How am I supposed to write something that's the same as the first one, but also different from the first one? How does that even make sense? But as I thought about it and looked back on writing Project Hellion and wrote Cursed, and now as I write Emerald Phantom, I know what it means. Readers read your first book for a reason. Something about the first book drew them in, kept them interested. So, when they go to read the second book they're going to expect that same element that kept them drawn into the story in book 1. But they also don't want to read the same story all over again. They want something different. A few good examples of this is Catching Fire, the sequel to The Hunger Games. The readers were drawn into The Hunger Games because of, well, The Hunger Games in the book. They liked the danger and the adventure that went along with those games in the book. Therefore, Collins gave them more of that in book 2. She gave us a new Hunger Games, only with new characters and a different setting.
Another example of this is Legendary by Stephanie Garber. Personally, I loved the mysterious and magical world of Caraval. You could never tell what was real and what wasn't. That's what drew the readers in. The game that is Caraval. So Garber gave us a new Caraval in book 2. The same... but different. We were now reading in Tella's POV, we get to have another game of Caraval with mysteries and clues. Only this time, everyone was telling Tella that this wasn't just a game... it was real. Same... but different.
A less obvious example is The Wicked King. In The Cruel Prince readers kept reading because of the intrigue and the danger and the struggle for power. They stayed for the tension between her and Cardan. In book two, I expected more of that power struggle, more of that tension, more of the danger and intrigue. And Holly Black delivered. She gave us a new power struggle. Jude had the crown, but now she had to struggle to keep the crown. It's a new battle, but also the same battle.

//2 Introduce a new character. This one is super important. Not just for the readers, but for the writers too. I get bored writing about the same characters for more than one book. I need something to spice things up, I need a new character to play with. I'll admit, I made life hard for myself with Cursed in that I didn't really have any new characters. I had Ryker... but he really doesn't count. In Project Hellion, I added Astoria and Maggie's POV. They gave me something new to play around with. In Emerald Phantom I've added a new character Mateo who is not only super fun to write, but also brings a new element and new mystery to the plot.
In Catching Fire Collins added all kinds of new characters to throw into her new Hunger Games. They added tension and flavor and danger to the book.
In Linger by Maggie Stiefvater, Isabel's POV was introduced along with a new character Cole. You get to see inside the head of Isabel and realize that she's going to be a more important character than she was in book 1. Cole adds something new to the plot. He rubs Sam the wrong way, giving Sam a new challenge. He also adds to Isabel's character in a big way.

//3 Raise the stakes. Book 2 has to promise danger for the characters. There has to be raised tensions and raised stakes. I sometimes have a hard time with this one. Figuring out how to do this without overdoing it can be hard. If you're sequel is the conclusion of a duology than it might be a little easier, but if it's the second book in a trilogy or a longer series, it can be harder to find that balance between what's too much and what's not enough.
In Linger, Cole also brings a level of tension to the plot and raises the stakes in that he's a very famous super star turned werewolf. If someone spotted him in town, it could expose all of them. It's a more subtle raising of the stakes.
In Legendary, the game isn't just a game anymore. Everything Tella does, everything that happens in Caraval, has consequences in the real world. One wrong move and something truly awful and world changing could happen.
It all depends on the kind of story you're telling. For something like Emerald Phantom, the stakes will be more subtle than something like Legendary, but still massive to the characters.

Those are the three core things that make a good sequel and will make your life as a writer a little easier. I can't say how important it is to add at least one new character to a sequel. For me, it really helps to keep me focused and interested in the story. I couldn't go a whole two books talking about the same characters constantly. There needs to be change or something new. If there's neither of those things in your story... things will get boring.

On a micro level, there are a few other things that might help. You can highlight a side character from book 1 like what Stiefvater did with Isabel in Linger. You can add a new subplot, or if you have an unfinished subplot from book 1, delve deeper into that. If plot structure is a problem (it always is for me) the beat sheet from Save the Cat! helped me so much when I was stuck in the middle of Emerald Phantom. The three act structure might be helpful to you too.

So there you have it, what I've learned from research and writing three in a half sequels! I hope you these tips have been helpful to you and make writing a sequel a little easier.

Have a great week!


Have you ever written a sequel? Do you have any tips for making it easier??

June 01, 2022
Happy Wednesday and happy June first!  I'm writing an actual post for the first time in months! If you've been following this blog at all (first of all, thank you! I appreciate you and your dedication!) then you know that I've hit a bit of a dry spell recently. My depression has been pretty bad these past few months and while I've been flourishing at my creative writing, my blog writing hit a dead end. I know what it is. My words on here felt meaningless and pointless. I think that's the depression talking, convincing me that there's no point in me being on here even though for the past few years I've loved writing on this blog even back when only one or two people read it. In 2020 I started writing more about faith stuff on here, which was great and I hope I touched people through those posts, but over the past few months (even in 2021) I've been struggling with my faith a little. I'm in a better place now, but it was shaken at the end of 2020 and
2 comments
Read more

Introduction to Heart of Xion

May 18, 2022
Happy Wednesday!  It's been a hot minute since I wrote a blog post on here that wasn't a monthly wrap up. To be honest, I'm still struggling with major burn out when it comes to writing on this blog, but I'm going to try and ease myself back into this blog thing by posting about my WIP that will be coming out in August! This is a standalone (clean) NA fantasy set in the same world as Desert Flower.  It feels sudden to me, but to be honest, I've tentatively been thinking about publishing it this year for a while. I feel like I tried to talk myself out of it by saying that publishing four books in one year would be too much. That its overkill and I don't see many other indie authors in my genre doing this... but that was my only argument against publishing Heart of Xion this year. I figure why bother sitting on a draft that I plan to work on and edit this year anyway and wait to publish it? I also have a bunch of other drafts that need editing/working on in my bac
4 comments
Read more