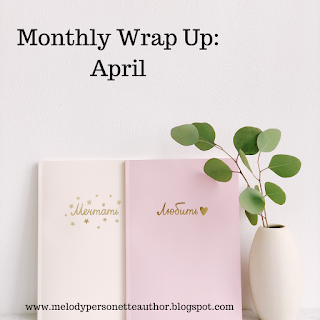 I disappeared from the blog for a while there... April was a bit of a rough month. I struggled with a lot of anxiety and depression this month. The world is a crazy place right now, my classes have been stressful and I haven't had a lot of motivation or inspiration to write anything. I still have my off days, but I'm getting day by day. Just working on the small stuff and enjoying the beautiful Spring weather.

April Writing: Writing wasn't great this month... I started working on St. Croix Falls 3 and then hit a rut and then lost all motivation, inspiration and passion for writing in general. I feel like I've barely touched it all month. I hit the part of Emerald Phantom I've been super excited about, and then again, lost all drive to keep writing the story. Last Monday I didn't write at all. On Tuesday I felt kind of miserable honestly and I knew if I didn't write something, even if it was just a paragraph of a story I didn't plan on following through with, I would feel even worse. So, I sat down and opened a Google Doc and wrote something. It ended up being a heart-breakingly beautiful story about two Unseelie Sidhe from Faerie set in the world of St. Croix Falls. The beginning of the story takes place before Wayward starts and the story ends where book 3 picks up. It's a novelette, finishing at about 13,000 words and is currently a first draft. I'm calling it Defiant and I'm hoping that I might be able to release it in May. I think it's a story worth sharing with others and might help to give readers a feel for Faerie and Mia's father, Lars. When I first started writing it, I didn't think it would end up touching my heart the way it did. It was a hard book to write because Castian and Shia (the MC's) make a lot of mistakes and go through a lot of stuff in just 13,000 words. There's a lot of pain. But what I love about the story is it taught me something I needed to hear right now: that there is a light at the end of the tunnel. Things may feel dismal and hard and like it will never end, but there's always hope and hope is what we need to cling to when nothing else makes sense. Castian reminded me of that last night and I hope he can remind others of that too.

April Reading: Reading wasn't great in April... I reread This Savage Song by Victoria Schwab, which was amazing, of course. I got Our Dark Duet and started rereading that but... then I sort of fell into a reading slump so I haven't gotten past the first three chapters yet. I'm hoping I'll be able to pick it back up in May and finish it.

April Life Stuff: April has felt kind of hard. Like I said, anxiety and depression really hit me hard this month. I've been having a hard time staying optimistic. Everything is closed, everyone's wearing masks, the Internet is so saturated in information that it's hard to know what's true and what's not. There's a lot of fear and panic in the world. We didn't get to go see family or go to church for Easter this year... It was a good day, but it wasn't super great or fun either. Classes were rough. I had two papers due on Monday and one due next Monday, all of which were long and hard to write.
And to top it all off, our poor pug-chihuahua mix has an eye infection that requires a lot of medicine three times a day for a week and he has been really difficult in getting the eye drops and medicine into him.

I am happy though with the progress I've been making in practicing my driving. I feel confident that I'll be ready by July or August to take my driving test (if people are allowed to do driving tests since it requires two unrelated people to be in the same car together and not six feet away haha). Either way, I'm really happy with how far I've come and the fact that I can even say with confidence that I'll be ready to take the test by the middle of the year.

But there were also some good moments too. Easter was different, but it was still a good day. I wrote Defiant, which has definitely been the highlight of my month haha We've been to so many parks and have enjoyed so many beautiful Spring days. I bought a new skirt and the new Ahsoka shirt that Her Universe just came out with. The final season of Clone Wars has been epic. Last Friday's episode was flawless. I finished it and just had to sit there and process what I just watched. The episode made me love Ahsoka (and to be honest, Maul haha) even more than I already did. I could go on and on about the two of them. They're so amazing in their own ways, so to have them in the same episode, interacting with each other? It was pure awesomeness.

Looking forward to May: Honestly, I don't have much planned for May. Right now, I don't have a lot of big things to look forward in May, so I'm focusing on the small stuff. I think we get the trampoline we ordered, so that'll be pretty fun. I want to release Defiant at some point and that'll be awesome. The Clones Wars series finale will air in May and I don't know if I'm ready for that haha I'm oddly excited for May 4th this year. Maybe because I don't have a lot else to look forward to haha

I'm taking a Rock and Roll Literature class and philosophy class starting in May as well. That'll definitely be interesting and I'm looking forward to both of them. I'm going to work on St. Croix Falls 3 and hopefully find the motivation and time to work on Emerald Phantom. The 100 season 7 starts at the end of the month. It's the final season and if Bellarke does not happen I will just about die! I am so not ready for The 100 to end. 😭 But I'm also excited to watch the final chapter of the show. I'm also super excited that Avatar the Last Airbender is returning to Netflix May 15th!! I can not wait to binge all the seasons. I haven't gotten to watch them all in order in years!

I don't know how May will go. At the moment everyone is saying that the process of re-opening will start this month. If that's true, I don't know how that'll work or how it will go. If it's not true, I don't know how that will go either. Everything feels very uncertain and I can't predict how the month will end up. All I know is that its important to look forward to the small things, to trust in God because He is certain when nothing else is, and try to enjoy the small things in life. I know I've used the words small things a lot, but there's no other way to put it. There's not a lot of big stuff happening right now. I mean there is, but like in my normal day to day stuff I don't have a lot of places to be or things to do or anything. All I've got is the small stuff and I'm choosing to focus on my excitement instead of my uncertainty about the future.

Also, I want to say a huge thank you to everyone who has been so encouraging and who have supported me through my books in April. Seeing my first review on Cursed (five stars!) and how many people are reading Wayward and Cursed has been so wonderful and I'm so glad that people are able to enjoy reading my books during this time.


How has your April been? What are you looking forward to in May?