I just wanted to pop on here and say that Cursed is officially out today! 😆 This book took me a lot longer than I thought it would to write and revise and publish. It went through a lot of different phases. This is my second sequel I've ever hit publish on and it feels amazing. Project Hellion was a hard book to write. It took me almost two years. This one? Took way less time, but was just as difficult. The fact that Wayward did well enough to warrant a sequel and that I'm confident that Cursed will do as well as Wayward? It's pretty cool and something I wasn't sure I would ever get to have.

So, if you're interested, check out Cursed HERE! Wayward is also up for sale to celebrate the release of Cursed. You can get that for 1.99 or on Kindle Unlimited HERE. 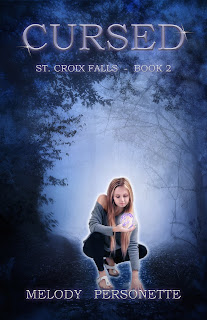 When Mia Avery moved to the small, seemingly sleepy town of St. Croix Falls with her mother and meets Rhett, she was thrown headfirst into the dangerous and dark world of the Fae. She discovered that she was far more connected to their world than she could have ever imagined.

While Mia works at recovering her lost memories and figure out her feelings for a certain Unseelie prince, she also has to deal with two Seelies breathing down her neck. Ryker and Joelin aren't the most patient of Fae's. The sooner they can get Mia's magic in order, the sooner she can open the door to Faerie and help stop her terrorist father before he hurts anyone else.

As if all that wasn't enough to deal with, a new threat looms over St. Croix Falls. A curse is on the loose in town. It's sucking the life out of the Fae one person at a time. The only way to stop it is for Mia to gain control over her newfound magic and stop it before it can hurt anyone else.

Have a great Tuesday everyone! :)