So! The cover for Sterling Silver is finished and ready to share with everyone! 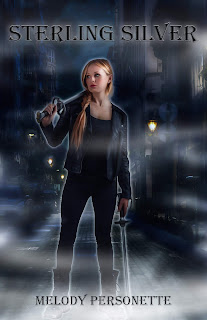 There it is! Isn't it amazing?? I love it so much! 😍 Tabitha looks amazing on the cover and it just captures the whole vibe of the story so perfectly.

Tabitha Sterling has always wanted nothing more than to fill her late father's role as the next vampire hunter to represent her family in the Moirai, a secret organization of vampire hunters. She lives for the hunt and the kill and is determined to be ready for when she turns eighteen and goes through the trials to prove she's worthy of being a part of the Moirai. Tabitha has always thought she's had it all figured out. She's the fastest and strongest hunter around. She doesn't need help from anyone.

That is, until she meets Sebastian.

During a regular night of hunting, Tabitha bumps into a tall, dark and handsome stranger, who, the next day, ends up being the new guy at her school. Coincidence? Yeah, she doesn't think so either.

Turns out the Moirai have sent for him to train her for the trials. As Tabitha trains with Sebastian, she realizes the two of them are bonded through old history between their two families and an old foe who is fixated on Tabitha. Alistair has come to town and is willing to do anything to win Tabitha over to his side. He wants her for her extra-ordinary speed, strength and vampire-like hunter instincts. As Tabitha and Sebastian fight to figure out what Alistair's end-game is, she must come face to face with her family's past and the truth of why she's between Alistair and the Moirai's game of tug of war.

And! You can now pre-order Sterling Silver! Pre-Order Here!


I've been working on this book on and off for the past four years, so to see the cover and know that it's coming out in two weeks is so crazy and amazing! This book means a lot to me and I'm so excited to share it with people and for others to finally get to read the first installment in Tabitha's story!

What do you think of the cover??