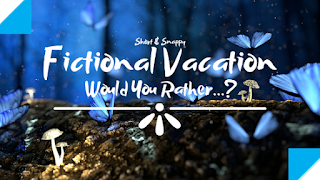 
~ Include the graphic Madeline made.

~ Tag some other people if you feel so inclined

Let's jump right into this!

Train with demigods for the summer at Camp Halfblood OR attend Hogwarts to learn some spells for a semester?

How is this even a question? ;) Camp Halfblood of course! I adore the Percy Jackson series, so I would do just about anything to be a halfblood for the Summer. The real question is, who would my parent be?? My enneagram four side who loves being special and different wants me to be a kid of one of the big three... maybe Hades just to make myself extra special and unique from everyone else ;) But most likely I'd end up being like a Posiedon kid... or if we're being real probably Apollo cuz I'm a writer and all that, even though I suck at poetry and music though I guess that would make me a special Apollo kid. The only one who isn't good at music or poems... or medicine.

Go on an epic quest through the lands of Middle Earth OR be crowned a king or queen for your bravery in Narnia?

Again, how is this a question? ;) Narnia for sure! One of my dreams as a kid was to find the wardrobe leading to Narnia.

Fly with Peter and his Lost Boys in Neverland OR have a crazy tea party with the Mad Hatter in Wonderland?

Oooh now this one is harder... I'd like to fly with Peter and hang with the Lost Boys but... I think at the end of the day I'd go with Wonderland. But only if I can have a tea party with either the Johnny Depp or Sebastian Stan Mad Hatter haha

Get trapped in the world of Jumanji OR be forced to dress up and attend a party at the Capitol of Panem?

Ok now this one is a more of a negative would you rather. The kind where you have to pick the lesser of two bad situations. I love the movie Jumanji but even the thought of being stuck in that world scares me. Like seriously my friend has the game of Jumanji and I was for real hesitant to even play it! That movie got in my head in a big way haha But also... I don't know if I could deal in Panem. That is it's own brand of whackiness and danger. I guess my thing is, I would choose Panem if I was at the party of my own free will. Like if I was from one of the wealthy families and was invited. Then yes, I would go. But if I was a tribute? I'd rather die playing the game of Jumanji then be forced to go to a Panem party as a tribute cuz then that means I'd die in the arena and... I'd rather not do that. So take from that answer what you will haha

Sample all of the candy you’d like at Willy Wonka’s Chocolate Factory OR have a nice stroll with Pooh and his friends in the Hundred Acre Wood?

This one is hard too!! I'd want to go and eat all the candy at the chocolate factory but also... a lot of that candy has bad side effects so I think I'd be better off hanging with Pooh and his friends in the Hundred Acre Woods. Sounds more peaceful and chill.

Head out on a gold-hunting expedition to El Dorado OR hop in a submarine and explore the lost city of Atlantis?

Oh sheesh, you're going to make me choose between El Dorado and Atlantis?? But how?? Those are two of my favorite movies!! Like... I want to do both. I want to con my way into El Dorado with Miguel and Tulio, but also like... I'd love to see Atlantis. But I think I'd have to go with Lily Cat on this one. Submarines? *shutters* Not my thing. So, El Dorado it is!

Camelot hands down!! I've always, always loves the Arthurian legends. I would die if I got to meet Merlin and Arthur and Gwen and Morgan and Mordred and all of them. Bonus points if they're the characters from the show Merlin.

Alright, anyone in the comments willing to clue me in on what Fantastica is? I do know Inkworld (I read the book years ago and loved the movie) so I guess out of default and because it would be pretty cool, I'd go with the Inkworld.

This was so fun!! Though I have to admit, I think I over thought a few of these questions... but I mean these are serious questions! You need to think of every variable. ;) Thanks for the tag Lily Cat!

If I haven't tagged you and you want to be a part of it as well, feel free to snag Madeline's graphic and do the question!

What did you think of my answers? Isn't this a fun tag??