May 10, 2019
Hello all! So I was going to do another book review for this Friday buuut then I read Nicole's blog post and saw she "stole" a friend's tag from her blog and I was like I'm going to do that too. So I totally stole her stolen tag and am going to do it on here cuz it looked so fun! 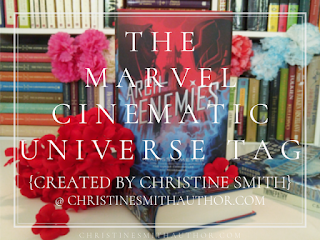 Rules of the tag:

Feel free to include the above graphic somewhere in your post (but it’s definitely not necessary). Take the questions and answer them on your blog (or social media or wherever!). Tag up to 5 other Marvel fans!

Without further ado, here is the Marvel Cinematic Universe Tag in honor of Endgame created by Christine Smith. 😃

How Were You Introduced Into the MCU Fandom?

Well, so, my answer to how I got into the MCU fandom starts with the comics. Actually, it starts with a TV show. I don't know if anyone else has ever heard of this one but I loved X-Men: Evolution. It was an early 2000's show and to this day is still one of my favorite iterations of the X-Men. I grew up loving the X-Men. I'm pretty sure they were the very first group in the MCU (comics) that I fell in love with. They were the ones that made me love this fandom from the very beginning. I also grew up playing with Marvel action figures with my brothers and with a mom who was well-versed in the characters and their powers, so when they started coming out with movies based around these characters? I couldn't wait to watch them. So, yeah, the X-Men were the ones who introduced me to the Marvel Universe and therefore brought me into the MCU fandom years later.

Uph this one is hard!! The first one that comes to mind though is Thor: The Dark World. That one is at the top of my list of favorites in the MCU. However, if we're talking pre-MCU, I thoroughly enjoyed the Ghost Rider movie with Nicolas Cage. One of my all time favorite Marvel movies since the moment I saw it. (Dark, dangerous anti-hero anyone??)

Psh, as if I can choose just one! Thor's definitely way up there, right next to his bro Loki. Black Widow's up there too... Gamora, Ant-Man (he's hilarous!), Spider-Man (not Tom Holland but like the Toby Mcguire Spider-Man), Bucky, Captain America, Ghost Rider (of course) and literally every single one of the X-Men with Rogue at the very top. Sorry, X-Men holds a very special place in my heart and if ever asked the question of who my all time favorite marvel character is, I will always one hundred percent say Rogue.

If you were transported into the MCU and had to trade places with one of the superheroes, who would you choose?

Ummm... I wouldn't be able to survive being any of them. But I think I could handle being the Wasp. Shrinking and growing super tall and flying around sounds pretty cool. I guess that probably appeals to me because it would fulfill my childhood love of fairies haha

What are some of your favorite quotes from the films?

Look, I promise I'm a legit Marvel fan but my memory isn't so great sooo give me a second to Google some quotes. Although I will steal one or two from Nicole's post because they for real are some of my favorites haha

"Oh, this is much better. Costume's a bit much . . . so tight. But the confidence! I can feel the righteousness surging! Hey, you wanna have a rousing discussion about truth? Honor? Patriotism? God bless America!"
"I can do this all day."


"I am burdened with glorious purpose."

"There's an Ant-Man and a Spider-Man?"

"Well, for one thing, I'm not Asgardian. And for another, we have the Hulk."

"I know this neighborhood," he says. "I got beat up in that alley. And that parking lot. And behind that diner."

"If it were easy, anyone would do it."

There are many more but... these are all I got for now haha

Which crew would you want to be part of the most: Avengers, Guardians of the Galaxy, or Revengers?

Hahaha! The Revengers are hilarious! The Guardians are a little too wacky for me so probably the Avengers. They get stuff done! And who wouldn't want to work side by side with someone like Iron Man or Captain America??

I'm not a big shipper in the MCU. X-Men is a different story but I seriously need to stop bringing them up in all my answers here because they aren't even in the MCU yet! I have to say though, there was a little while there were I seriously shipped Bruce and Natasha... It was sad they didn't work out though. :( I shipped Jane and Thor and they didn't work out either... more sadness. Vision and Wanda too I shipped. Another not working out. And I sort of in the back of my mind shipped just a tiny bit Loki and Valkyrie haha

Least favorite, would probably be Ego from Guardians 2. He was seriously so annoying and that movie was a train wreck.

I think my most unpopular opinion about the MCU right now is that I'm not a fan of Tom Holland's Spider-Man. I did not really like Homecoming... like at all. Spider-Man is a character that I love and respect deeply and I loved pretty much every other version of him... I just can't get behind Tom Holland's for some reason. However, Infinity War and Endgame did redeem him a bit for me. I am actually a little excited for Far From Home. Maybe it's because the first version I saw was Toby Mcguire and his Spider-Man movies were some of the first I ever saw so I have a deep love for those movies. They introduced me to all things awesome like Harry and Venom and Green Goblin and some of my all time favorite Marvel villains.

I did not like the second Guardians movie at all! It was so stupid and gross and they went way over the top on the comedy to a gag-worthy degree.

Thor: The Dark World is one of my all time favorites as I said above. I'd peg that as an unpopular opinion.

Oh! And let's not forget I can't stand Captain Marvel. After seeing her in Endgame I was so happy I didn't spend my money on seeing her movie. She just felt so condescending and self-absorbed in every single scene she was in. But that's just me *shrugs*

Ok, so technically this isn't part of the MCU but I really loved his cameo in Into the Spider-Verse. It came out after his death, and I don't know, the scene was just really touching and how he told Miles the suit always fit eventually was really cool.

Umm, so I'm still getting to know people in the blogsphere so I don't want to tag someone that isn't a Marvel fan... So if you are a Marvel fan and happen upon this post and have a blog then I am tagging you and you should totally do it because this was pretty fun! :)

Have a great weekend everyone! :)