May 24, 2019
Hello hello everyone! Happy Friday! I can't believe we only have a week left of May. This month has felt like it's gone by so fast for me. 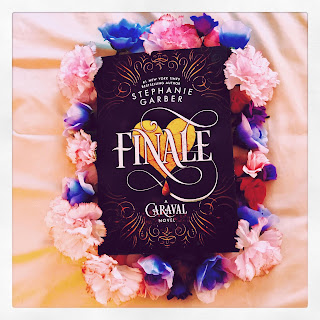 Despite it going by so fast though, it's been a really great month (especially in the book department). Two of my most anticipated reads came out this month: Finale by Stephanie Garber and Romanov by Nadine Brandes. Of course, I had to read Finale first and man guys!! It was so good!! I'll try to keep all the spoilers to myself, but I just have to say, this book was the perfect ending to the series. When it comes to ending a series I always get a little nervous because you never know what will happen. Some authors like happy endings, some like sad endings and some like bittersweet endings and sometimes the ending the author envisions isn't what the readers envision.

However, Stephanie Garber did a brilliant job wrapping up the Caraval world. I am so sad that the stories of Tella and Scarlett and Legend are over. :( As I write this, I just realized how hard writing a review on a series, especially the last book of a series, is for me.

I think the best way to start this review is by saying how much Stephanie Garber put into this book. In this day and age of social media, I love that I get to follow my favorite authors and watch them progress through the different stages of writing a book. I would have enjoyed Finale regardless, but reading it was even more special because I know how much care and effort and energy and time Stephanie put into this book. There were more than a few times when she talked about on her Instagram who she wanted to put everything she could into this book. I think during one of the last stages of editing the book she quickly added a scene or two just because Finale was it. The last one and she wanted to put her all into it. And she really did. As I read it, I could see her heart and her love for the characters and world she built.

When I first read Caraval, the world was fairly undefined in the best way possible. It was mysterious and magical. The whole plot was mostly smoke and mirrors. Some things were real and some things weren't. By the end you realize half the twists that happened was all a part of Legend's game. I mean, the tagline for the whole series is Remember, It's Only A Game. And that's just what Caraval was. It was a marvelous game. A trip into a fantastical world where nothing is exactly as it seems.

And then Legendary came out and within Legendary, Stephanie rooted the characters more firmly in their reality. She built upon the world she established in book 1 and created a whole religion and mythology of Fates and tarot cards. Stephanie turned her slogan for book 1 on its head when Legend warns Tella that this Caraval is not a game. Though I truly love Caraval and Finale, Legendary is probably my favorite of the series. I love Tella and what she went through in book 2.... and I really love Jacks. It was the best thing ever when Stephanie introduced this wicked character in book 2. I loved seeing him in book 3 and reading his arc. One of the things I was a little disappointed about with book 3 was that Jacks story didn't get tied up in the end. He was such an vital part of Tella's story and then when book 3 ends all you get is a passing mention about him from Scarlett. But since we're still on the subject of Jacks, I liked the whole sort of love triangle thing going on in Finale between Tella, Legend and Jacks. It was so intriguing and hard to describe. Their triangle wasn't the typical YA love triangle. It was so much more dangerous and complex and magical than any other I had ever read about. And of course, I can't not mention Scarlett and Julian because while Tella has gotten herself involved with two complicated, dangerous magical men, Scarlett and Julian are just so... perfect. They have their rocky moments, but overall, they have a true love that can not be shaken and it was beautiful.

In the author's note (can I just take a minute to say how much I love author's notes in books? It just makes the whole reading experience all the more personal and wonderful) at the beginning of Finale, Stephanie Garber talked about how she had a purpose for each book. In book 1 she wanted it to be a little chaotic and crazy. Book 2 she wanted to be full of unanswered questions and mystery and book 3 was her love story. And she hit the nail on the head with Finale being her love story. The book dripped with romance in the best way possible. That might be why Finale is my second favorite of the series. I mean, book 1 had romance but book 3 was just full of sparks flying, heart wrenching romance and I loved every second of it.

To go back to the worldbuilding for a moment, Stephanie totally out did herself in Finale. Legendary had a lot of explaining to do and setting up for Finale. You learn about the Fates and the cursed Deck of Destiny. You learn a lot about Tella and Scarlett's past. You learn about Legend's past too. There was just a lot of setting up (not in an info dump, boring kind of way. Stephanie created the world of Caraval with incredible and interesting detail that keeps you reading). In Finale, everything you learned in Legendary comes together and all the pieces to the puzzle start to fit together. One of the things I absolutely loved in Finale was getting to know the Fates. I think they're all a little bit wonderful in the way only chaotic and magical immortals can be. It was cool how Stephanie gave a few of them scene-time and you got to know them a little and get to know their personalities. If you've read the book then you know what I'm talking about when I say... I kind of liked the Poisoner a little bit? Ok, maybe a lot. From what little we saw of him, I wouldn't have minded knowing him a little better cuz out of all the Fates he didn't seem wholly half bad (for a dangerous and wicked Fate anyways haha).

Also, I'm holding out hope that there might be a spin-off series? There were a few things that happened in the book, a few scenes and a few bits of information that the sisters found out about that makes me really want a spin-off. (And not just because I want to know what happened to Jacks and maybe get to know the Poisoner a little better haha). All I'm saying is, it would be totally epic if Stephanie got the chance to write a spin-off. I would even be one hundred percent OK with a standalone! I just don't want to leave Caraval behind... The whole series was like nothing I had ever read and yet everything I could have ever wanted in a book series. I know that sounds a little ambitious, like for real Melody? It met all of your requirements?? Yes, it did actually!! And I want more... So I'm just going to be over here hoping that a spin-off happens.

So yeah, I mean if I wasn't restricted by spoilers I could go on and on about the book, but for now, this is all I will say. If you want to know more, you're just going to have to read the series.

I hope my review makes you want to go and grab Caraval and love this series as much as I do. ;)

Have a great weekend everyone!


What's a series that you love and wish would never end?