The Importance of Sci-Fi 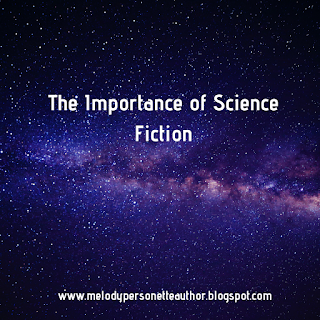 So, a few weeks ago while we were heading to my grandparents for my birthday, my mom was telling me about this speaker on Moody radio she was listening to and how she was talking about this genius guy (like I said this was a few weeks ago and I can't remember the guy's name haha) whose inventing chips that can be implanted in the brain and improves a person's IQ. I was horrified. Like why would someone make something like that? Why would someone invent a chip implantation and who in their right minds would pay money for that?

Anyone ever read Empress of a Thousand Skies by Rhoda Belleza? It's a YA sci-fi book where everyone has these chips implanted in their heads which allows them to have the internet in their brains, let them "cloud" memories and pull them out whenever they want and have TV play behind their eyes. A cool concept, right? I mean seriously as someone with a horrible memory, getting to store away my memories and then view them whenever I want sounds pretty great. So, does having instant access to the internet, my texts, phone calls, TV and pretty much everything that is on my phone in my head. With a thought I could pull up anything I want and search Google. It sounds like a good idea, right? Well... not so much. In Rhoda Belleza's book the bad guy rips people's memories apart, creates virus enabling him to access a person's brain chip and control them through the chip. I can't think of any right now, but I know there have been other science fiction books and movies with the same sort of concept in it. If not a chip in the head, then one on the wrist where you keep your money and stuff.

Why am I talking about this?

Because the future is scary. People are working on chip implants, AI's (worst idea ever!! Has no one ever seen a science fiction movie before?!) and robots. Did you know that the harmless voice in your phone, Siri is a self-learning program? So is Alexa!! Not to sound creepy but they are always listening and learning new things. There have been a lot of weird stories about Alexa that people laugh about but shouldn't because it's freaky. Their like mini beginning AI's and yet everyone is OK with that! You know why? Because Alexa and Siri make their lives easier. And you know why people would pay to have a chip implanted in their head? Because it would make life easier for them. Robots? If we had robots, they could do the jobs no one wants to do. Again, make life easier. We have become so self-absorbed and lazy that we would do anything to make life easier on ourselves, even when it’s dangerous and wrong.

Is this the kind of future we want? Where all of our science fiction horror movies and shows come to life? Where AI's and robots (or worse AI robots) are a thing? Where people have chips in their brains? Chips can be hacked. Technology can be hacked. Easily by the right people. Isn't biohacking enough to deal with right now? We don't need another way for someone to kill people and destroy lives.

So why am I being so dramatic about this?

And that is why the genre of science fiction is so important. Here's my main point: science fiction shouldn't be written off as silly or useless. Science fiction writers have been predicting the future for years! Science fiction writers make us think about what we are doing with our technology, with our bodies, with our future. They make us think of the repercussions of playing God, at going too far and overstepping nature's rules. Writing science fiction is kind of like looking into the future and giving us a test run. OK so what if society turned into this? What would happen then? What if AI's became a thing? What if there were robots everywhere? What if we did have chips implanted in our heads? What would happen? What would be the pros and what would be the cons? How would the world react or change? Look at The Giver, Jurassic Park, The Hunger Games, Divergent, 1984 by George Orwell and many, many more.

OK... now that I have all my doom and gloom out of the way, I do have to say science fiction isn't all about the horrible repercussions of our growing knowledge of technology. There are other science fiction books and movies (mostly movies) that predicted the awesomeness that was to come. Star Trek, Star Wars, The Jetsons. ;) Seriously I would have no problem if someone would just make flying cars a thing! I'm against AI's but to be honest I would be OK with a self-learning car, so it could drive me around and then I wouldn't have to get my license. Also, it would be kind of cool to have robot boxing like in Real Steel. There are lots of cool things we could do... but instead we like making life hard for ourselves and go right to the AI's, robots, and cloning.

What do you think of the science fiction genre?