March 29, 2019
March is almost over! I can't believe how quickly the first three months have flown by, though to some extent it feels like its been a long year already haha 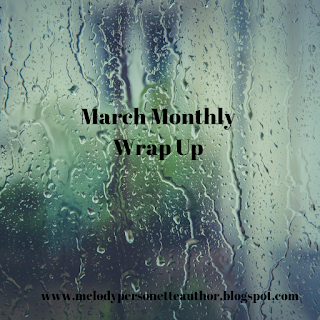 So here you have it, an overview of March:

March Writing: I wrote the first draft of my supernatural WIP in 19 days this month! I can't remember the last time I wrote a draft in less than a month so it was nice to know I still have it in me. This WIP, which I've been calling Eliza after my MC's name, has been a blast to write! As I've experimented with other genres and story forms I've realized the supernatural genre is my niche. The one that I am most comfortable in, the one I know the best and enjoy writing the most. I liked this book even more so because there were no vampires. Turns out I enjoy reading about them and watching TV shows with them in them more than writing about them. Don't get me wrong, I love my Sterling Hunter series on Wattpad. Tabitha and Sebastian and their story was what made me realize I love writing this genre and have the capability to write in this genre but I enjoyed writing this WIP more so because the creatures in it are either made up or lesser known. I've got banshees and sylphs and daimons while also having psyches and Shades that I made up. Also when I first write Sterling Hunter my worldbuilding skills were sorely lacking. A few years later and I now know how to flesh out a world within our world with rules and politics and systems and races so for this WIP things will be a lot more clear and refined in that department.

As for Lost Girl (the new and final title for Second Star to the Right), I am on micro edits. My least favorite part of the writing process. It's just so tedious and takes so long but I just have to keep telling myself its worth it. It'll make my book better. I'm also starting to work on constructing a query and researching agents. Hopefully by May I'll be ready to start querying agents... which is a surreal thought. I'm nervous but hopeful. I have realistic expectations but that doesn't stop me from dreaming of being the exception of the rule and having an agent by the end of the year. We'll see what happens though. I just need to keep praying about it and making my manuscript the best it can be.

And because I love being busy I'm also working on a novella about a small town where wendigos and humans live side by side and my MC, Tullah, has to solve a mystery. Tullah has been in my head for a long time and I think I've finally found the right story for her.

March Reading: My reading has been much slower than it usually is. I finished Stain by A.G. Howard which was as dark and whimsical and beautiful as all her other books. It was the longest book I've read in a while at 500 something pages. I so enjoyed it though. It's one of those books where you have to get to the end to fully appreciate the scope of the story and all the pieces falling into place.

Just yesterday I finished The Gilded Wolves by Roshani Chokshi. I'd heard a lot of good things about it and when I found it at the library and realized it was historical fantasy I knew it had to be my next read. Maybe because the only other true historical fantasy book I've read is Fawkes, the book reminded me of Nadine Brandes' book. The two books however have two very different vibes. The Gilded Wolves is set in Paris 1889 and had all my favorite things in it. Romance, history, mythology, history, action, good friendships. It had complex characters and an intriguing storyline. So if you enjoy historical fantasy you should definitely pick up this book! I appreciated Roshani's author note at the end of the book too about why she decided to write the book and what sparked the intense research she did to write The Gilded Wolves and the themes woven throughout the story.

At the beginning of the month I read Supernaturally by Kiersten White and the second book in her Paranormalcy series. It was... good. But I sort of had to force myself to finish the book. It just didn't capture my attention and keep me interested the way the first book did. I do plan to read the third book eventually, but right now I just can't get back into the series.

And at the moment, I just started reading Over the Moon by Natalie Lloyd. I adore her books! They are the sweetest, most whimsical and quirky and charming and beautiful books I've ever read. Her themes are so earnest and wonderful and her characters are always a delight. I'm only on chapter three but I'm loving it so far.

Since I'm writing a novella, I thought I should read one or two first so while I read Over the Moon I'm also reading Kara Swanson's The Girl Who Could See. I love the concept and I'm loving the characters and the world she created! I can't wait to read her Peter Pan continuation Dust when that comes out!

Life Stuff: Well I had my birthday on March 9th. I'm officially 21! Woohoo haha I had a fun day at the mall the day before with my mom, little brothers and grandma and then afterward we had dinner and cake with family. On my actual birthday it was a pretty chill day. I got to write and read some and opened presents and had some cake and hung out with a friend.

I also got new glasses! My old ones were falling apart and the side cracked so they were falling off my face whenever I bent down even a little bit so I'm really happy to have a new pair.

I'm also attempting to study for the drivers permit test... I despite that test so much but I am determined to have my permit by the end of April. I just need to put more time and effort into my studying and work really hard. To be honest, I'm not a big fan of driving.

I got my permit when I was sixteen which feels like forever ago and it was not fun at all. I got really anxious behind the wheel and I'm worried when I start practicing that'll happen again. And anyways, I just don't like driving in general. I have to because it's what you're supposed to do and you kind of need one to do things in life but... driving a car is not high on my list of goals to accomplish. My excuse for not having a permit or license for the past few years is Buffy didn't have a license! She was a vampire slayer, saved the world tons of times and she never learned how to drive a car! She had people drive her around. Too bad I don't have the excuse of being a vampire slayer... ;)

So yeah. I'm leaving March with a cold going through the house so I currently have a stuffy nose and cough and have been tired constantly for a week. Hopefully this little cold will go away soon though.

Next up, April and Easter! I hope you all had a great March and will have a great April!