October 06, 2018
Hey everyone! So I know its six days into October and my September wrap up is so late! This month is going to be a slow one for blog posts I think... There's just so much going on and I am feeling so busy and overwhelmed with a lot of stuff. But I am also looking forward to the weather finally cooling down and for lots of Fall days outside. 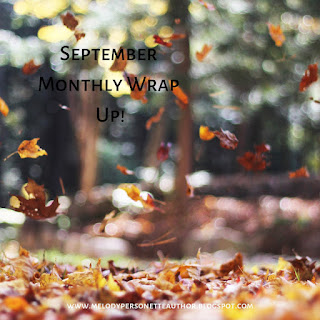 September Writing: September wasn't as productive as August, but I still did get a lot of writing things done. I worked on Blood Brothers for a lot of the month and near the end of September I even found a writer friend on Twitter to look over Sterling Silver and give me feedback! So I plan to fix up Sterling Silver a bit more and then fix Blood Brothers because I'm sure there will be a few changes that transfer to that book. I might even have her check out Blood Brothers if she's willing. Project Hellion also became on the top of my to do list near the end of September. I had it sent out to an editor and I'm hoping to have it back by the end of October and have it published on November 27! So keep a look out for that! The whole month I was also trying to figure out a certain idea that I've had for a while. It started out as a sort of Frankenstein retelling or continuation and when that didn't pan out I decided to change it to a Jekyll and Hyde thing... That didn't work out either, and now it has turned out to become it's own thing, a more original idea not explicitly based off a different monster story. (Though after watching Venom last night... its just a little bit inspired by a certain antihero and symbiote).

September Reading: For September I didn't get as much reading done, but Vengeful finally came out!! I was up and at Barnes and Nobles at 10:30 that Tuesday morning and got the special edition that was signed!! I was (and still am) so psyched about that! I finished it the same week and man, it was so good! Honestly, Marcella (the new bad guy) wasn't my favorite. She was a little too much of a feminist for me, but overall she was a pretty good villain and it was so, so good to see Victor and Mitch and Sydney and Dom and Eli again! The Eli backstory? Uph it killed me! I had so many conflicting emotions by the end of the book and I desperately need a third one now! That's pretty much the only book I read that month, and that is Ok with me. Now I just have to wait till the end of October for The Darkest Star by Jennifer L. Armentrout.

September Life Stuff/Random: So the reason October is going to be kind of slow in the blog post department is because my math class started. I knew it was going to be hard but I really didn't think it was going to be this hard. My anxiety is higher than its been all Summer and I'm just counting down the days till December 15, when my classes end. It's going to be a rough semester, but I'm determined to still enjoy the Fall, to still enjoy my writing and still just find time to chill. I also started a new small group at my church and I'm loving it. I'm so glad that I found it and it's been so good! This is sort of in October but I have to say, Trench, the new Twenty One Pilots album came out this week and guys!! It is so good!! Plus... Venom?? If you haven't seen it yet, you absolutely must. It was just amazing and no one can tell me otherwise. Tom Hardy is just the best and the characters he played, Eddie and Venom? They're just the best too. So definitely go see that movie. I am really, really hoping for a sequel!

So yeah, that was my September in a nutshell. I am both eager to enjoy October and ready for it to be over because once November comes around it means there's only one more month left before classes end. I hope your September went well and that your October is full of lots of comfy sweaters, caramel apples and yummy coffee!