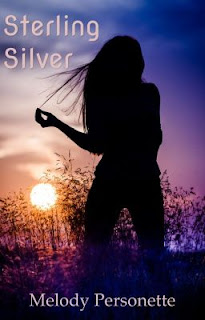 Go check out Sterling Silver which is ranked #120 in vampirehunter! I am so excited that Sterling Silver has gotten 113 views and I hope you all are enjoying the story and the characters and just where the book is going. I plan to start working on the sequel right after I finish the first season of the serial I'm working on right now so stay tuned for more info on that!

Here's a sneak peek from chapter 21 and a little taste of Sebastian and Tabitha:


Tabitha was just getting out of her car, trying to staunch the thoughts whirring through her head when someone tapped her shoulder. She jumped and spun around, fist out. As if a punch to the face could stop a vampire attack. Who she found instead simultaneously made her stomach drop and her heart skip a beat.
Sebastian folded his arms and grinned, cocking his head. Tabitha sighed and grinned back, letting her trembling hands drop to her side. "Jerk. You scared me."
"Yes, because a good punch to the face would have hurt me... As if you could actually hit me," he taunted.
Tabitha smirked and lashed out in a surprise attack. She itched for a fight. Something to distract her from all she had learned today.
Her fist connected with his shoulder and pain erupted in her knuckles. He didn't even flinch. She scowled and shook the pain from her hand, glaring at him.
He smirked. "Nicely done. Now... should we go to class or do you need to go to the nurse to have that looked at?"
She rolled her eyes and gave him a nasty look. Tabitha turned her back on him and started toward the school building. He fell into step beside her. And then in the silence between them, last night came flooding back. Tabitha swallowed. Their kiss... kisses. The way she had grabbed him and planted one on him before leaving his car. The way he'd made her feel invigorated and thrilled. It had both been romantic and something she'd needed. For a moment those memories distracted her from what she had found at the Carters, and Tabitha couldn't hold herself back any longer. She needed a distraction desperately, and Sebastian seemed to be her best bet.
Sebastian opened his mouth, his face troubled but Tabitha didn't let him get a word out. She grabbed the front of his shirt, and glancing around, yanked him into the shadows behind the stairs leading into the school building. "I don't want to talk right now. I had a pretty crappy half an hour and I just need to forget," she whispered. And then she pulled him toward her and kissed him. If she couldn't fight him than she could find another way to distract herself.