When You're Feeling the Doubt

June 13, 2018
Before I say anything else I'm excited to say I've updated the ebook version of Weapon Icean!! It now contains a sneak peek of Project Hellion. It's also on Kindle for 1.99, so if you haven't bought Weapon Icean yet, right now is the best time to do it!

So, I wrote half of this post when I was feeling stuck with Golden and just having some doubt and writer's block. Writing this post helped me to understand my own thoughts and helped me sort of move past that doubt and block... and then over the weekend I finished the post while feeling a little better, so I hope this post isn't too weird or confusing or all over the place. 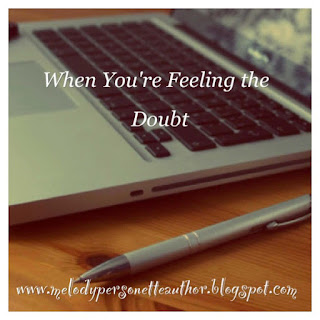 Anyways, so here it is. The last week or two I've been feeling this doubt about my writing. It's not writer's block or burnout. I don't think my writing sucks or that I should just give up. It's nothing like that. I'm more driven than ever before to get my books out there and to become a successful published author. To write books people want and love to read. I've never been so invested in the books I'm writing like I am now. Project Hellion, the Golden trilogy, Sterling Silver, I'm all insanely proud of those works. I love them and I poured everything into them and I've loved every second of figuring them out and writing them and revising them. I'm loving writing. So why do I feel this doubt? While I'm very proud of how far I've come as a writer, I know I still have a lot to learn, have a lot to figure out and accomplish. Writing will always be my love and my passion. The thing that I wake up every day excited to do.

I've never really felt this sort of doubt before. I don't even know if it can really be called doubt... It's like I'm proud of how far I've come, what I've accomplished and where I'm at, but I also keep thinking... what if nothing happens? What if I'm just wasting my time self-publishing? What if my books never go anywhere? What if I never go anywhere? I mean, I know I'm not going to be the next J.K. Rowling or Victoria Schwab, but I wouldn't mind my writing getting somewhere. For my books to get into the hands of readers who love my characters as much as I do.

When I first published Weapon Icean in 2016, I had been researching and thinking about self-publishing for a few years. At the time, self-publishing felt like the best option for me. Not just cuz I'm impatient and wanted to get my book out there as soon as possible, but I also felt that it fit me, the way I write and how my life was structured at the time. There were no deadlines, no nothing. I could work on a story at my own pace. Plus I was taking college classes and stuff... Now though, the end is in sight. I'll have my Associates by the end of this year and as I'm facing a summer of no classes and a whole lot of free time, reality is sort of setting in. I've been thinking a lot about my career as a writer and have tried to be as realistic as possible.

I don't know what next year holds or my time after graduating, but I know one thing: I want more than anything to be a successful author. And right now, I'm thinking self-publishing isn't really it for me. I know it works for others and good for them, but I'm not sure that's the right path for me or the genres I write in. I'm not giving up on advertising and promoting Weapon Icean and Of Magic and Mayhem. I even plan on publishing Project Hellion through Amazon too, but I think in the future I'm going to be more patient.

I want to seriously consider traditional publishing. Maybe even getting an agent. I want to at least try and work toward being traditionally published and I think Golden is the book for the job. Really, I don't know why I think that. Golden is such a weird book genre-wise. I've tried looking for books similar to it and I always come up blank. In the YA sci-fi genre, there is either space operas with romance and drama, romance novels between a teen girl and an alien guy who comes down to Earth, Firefly type books or Star Trek and Star Wars type books. There are even YA sci-fi books who's plots revolve around the politics of that world. But Golden isn't like any of those. There's romance (of course) and there's aliens and there's spaceships and futuristic tech and all that cool stuff, but there's so much more. There's existential crises, aliens with god complexes who believe themselves to be all powerful, cruel Acolytes and mysterious Priestesses. There are twists and turns and the whole of the book's plot stems from the religion of the Celests. I haven't been able to find anything like it in the YA sci-fi genre. On the one hand I think that's a good thing cuz it means my idea is fresh and original, but on the other hand, not so great when it comes to trying to find something to compare it to when explaining or pitching it to someone.

Anyways, I kind of got off topic. Doubt. Doubt is a real thing. I refuse to let it stop me from writing and I refuse to let it destroy my passion for the projects I'm working on, but it's also there... Something I have to deal with. I think it's just an accumulation of my bad habit of comparing where I'm at in my journey to where other's are in theirs and the fact that I suck at marketing and promoting my books. One of which I need to stop doing and the other that I need to work on. I hear this time and again in the writing community and I need to take this advice: don't compare your journey to others' journeys. Don't compare where you are now to where others are. For all I know they could have worked just as hard, if not harder, than me. Struggled with doubt and writer's block and slaved away for years before getting to be as successful as they are. Besides, what they publish is their final draft. Not their first draft. Most first drafts aren't that great, but no one ever sees them. Readers only ever see the best of their work, their final drafts, which means my first, second, third, fourth and on and on drafts don't have to be perfect either. The final draft will come... it just is going to take some time. As for getting published and becoming traditionally published? Well, I have been and will continue to pray about that. That is up to God. In His timing and His plans for me. I trust Him to open those doors for me if and when it's the right time.

Don't let doubt drag you down. Feel it, think about why you're feeling that way and then move past it because your writing is amazing and it will get into reader's hands one of these days. People are going to love your ideas and your characters just as much as you do. So yeah... I don't really know what this post is really about... Its sort of all over the place, but I hope somewhere in here is something encouraging or relatable.

Have a great week everyone!