April 27, 2018
Hey! So I haven't written a review in a while! I'm working on a review of Ready Player One but with Infinity Wars coming out this week

(by the time I post this it will have already come out) I thought I would do something in honor of the Marvel movies. These are the Marvel movies ranked from my favorites to my least favorites. But truthfully, I love all the characters that are in these movies. Some of these movies may not be my all time favorites or ones that I would watch over and over again, but I love every character, every hero, every antihero, every villain. They all brought this universe to life and did something that has never done before. Not even Star Wars is this big. Marvel and its Avengers franchise has surpassed even Star Wars! It's truly something incredible and like nothing that has ever been done before, tying movies together one after another, setting up an entire world where all these characters live side by side and then smashing them all into one giant movie? It's just... it blows my mind, as a creator and as a storyteller and as a viewer. I'm not sure anything like this will ever happen again. Not to the extent and vastness of Infinity Wars. This movie has been set up for years! Since Iron Man and The Incredible Hulk came out... These actors have stuck with the movies, with us, the fans, for so many years and it's just amazing to think about.

Loved (in no particular order):

Liked (in no particular order):
Eh (in no particular order):
I know a lot of people have raved about Spider-Man: Homecoming. I'm glad you guys enjoyed it and love the new Spider-Man, and yes, he does resemble the comic book Spider-Man more than the others but... I'm afraid the movie was sorely lacking. To me anyways. It was dull and boring and had no stakes at all. Plus I'm a real freak about Peter Parker being with either Mary Jane or Gwen Stacy, and they must look like the comic book versions! And he must have a best friend named Harry and all that... I commend Marvel for thinking outside the box and for giving Peter a new story and new friends but... I'm afraid Toby Maguire and Andrew Garfield (only the first Amazing Spider-Man movie, not the second because that one was lacking in story too) will always be my favorite Spider-Mans... 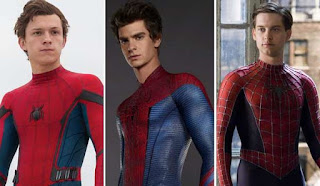 As for Guardians Vol. 2 I found it lacking in story too... I love funny. I love comedic elements in movies, but that movie was too funny, to a ridiculous degree. I thought that the first Guardians had a perfect blend of funny and serious and the characters were very well done and complex. It felt like they undid everything they had done with the characters in this second movie. Ego wasn't a great bad guy and am I the only one who is annoyed with that Mantis girl? Drax was so inappropriate it was cringey and not even funny. The only parts I enjoyed were Gamora and Nebula scenes and the Yondu character development. The climax between Peter Quill and his dad was pretty good too. Plus, I mean baby Groot is just adorable!!

The Incredible Hulk? It's in the "eh" section out of default. I never saw it so I can't really judge it in general. And I know Ghost Rider and the two "old" Fantastic Fours aren't part of the Marvel phases, they were pre-Marvel franchise, but I love them. Ghost Rider is probably one of my all time favorite Marvel movies and one of the first Marvel movies I ever saw was the two Fantastic Four movies. They'll always be special to me and always be some of my favorites out of all of them.

So yeah, there you have it. My loved, my liked and my eh Marvel movies. What are some of your favorites? Which ones did you not really like? Have a great weekend everyone and please! No Infinity War spoilers!!