April 30, 2018
Hey everyone! So Infinity Wars is officially out!! My mom and I are going to go see it this Friday and I've been warned that it's going to be a difficult, emotional movie. The anticipation is killing me! Anyways, here's my April monthly wrap up! 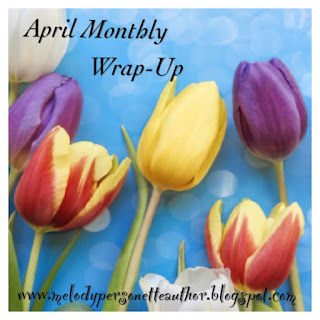 April Writing: What writing did I do this April? I worked on Silver I'm pretty sure. Wrote four new short stories and revised them for a class assignment. I started a new book/project about a wendigo and a girl and the occasional vampire. I had planned for it to be a novella, but I think it's going to end up being longer than a novella. For some reason I can't seem to write in-between books. I can either write short stories or full length novels, but novellas and novelettes are hard for me because I'm like if I'm already twenty thousand words in, might as well go all in with the story, right? Anyways, so that's what I've been working on. I also have decided to just go for it and start working on finishing up revising Project Hellion, so that's what I'm doing now. I've been patiently waiting and now I can finally dig back in and get this book finished!

April Reading: Books in April have been sorely lacking... I read Hero at the Fall by Alwyn Hamilton, which was amazing, of course. I couldn't put it down and thought it was the perfect, bittersweet end to her amazingly fantastical trilogy. If you haven't read her Rebel of the Sands trilogy I highly suggest you read it!

The only other book I read and haven't finished and probably won't finish is How to be Yourself by Ellen Hendrickson (I think I spelled her last name right?). It's all about social anxiety. How to manage it and facts and stuff. It's been an interesting reading but I'm craving something a bit more fantastical and magical right now... And since I only have like two weeks left of classes (the end is within sight!!) I think May will be a good month of reading for me.

April TV Shows: So Legion started in April along with my two favorite shows: The Originals and The 100. I loved Legion's first series. I thought it was innovative and creative and this second season is definitely both of those things. But... it's just a little too weird for me. Too twisty-turny, dark Alice in Wonderland-y. I'll probably catch up or go back and watch it at some point, but I just can't handle that down the rabbit hole type show right now.

The Originals however? All I can say is: Hope Mikaelson as a teenager! Man, I was not expecting her to be the kind of person she is. Like that last episode? It was brutal, but I mean even Joseph Morgan who plays Klaus was like, the daughter of Klaus Mikaelson was bound to have some issues. It was unavoidable and I guess he was right. Anyways, the final season of The Originals has a promising start and I hope that they end it well and give all the characters the end they deserve.

The 100 has only gotten through episode one at the moment. Its six years later and all the characters are past their teens now. Actually, every character that was a teenager for the past what? Three, four seasons? Are now young adults/adults. They're all passed eighteen, nineteen, which puts the whole series in a different area than it has ever been before. Clarke is a mom now, Bellamy's in charge of everyone in space, Octavia has gone off the deep end. I'm really excited for this season because everyone who was so close and were one big team the past four seasons are now separated into little sub-groups and I'll be interested to see how that plays out when they all come together again.

April Life Stuff: I have to think about this one for a minute... April felt like a long month to me for some reason. There was a lot of classwork. Since this is the final full month of the semester the teachers like piling work on us and so I feel like I've been doing a lot of classwork all month. Gotten a lot of writing done... My cousins came down because she took my brother Nate to his prom. We also went to a banquet thing for him because he won four awards from our local Boys and Girls Club. I'm super proud. But I mean, overall, this month has been pretty boring with not much going on which is kind of nice. Although, a small thing happened that I wrote a blog post about and plan to post on Wednesday. It involves the church in general and a few experiences I've happened over the past month and past few years.

Anyways, so that's my April in review! April's been a pretty chill month and now to look forward to May. I have no idea if we have any solid plans in May or if we're going anywhere or doing anything... I really have no idea. But I do know I want to have Project Hellion done by the end of this coming month. I'll keep you guys updated on Project Hellion's journey to being published!!


Have a great week everyone and happy Monday!!