My Writing Plan and Goals for 2018

January 10, 2018
Hi everyone! I guess I sort of took a break for the first week of the New Year, but now I'm ready to get back at it. Just a heads up though, I have two classes starting next week that I'm sort of dreading and stressing about and depending on how much work they give us, I probably won't be posting as regularly as I would like. I guess that always sort of happens when a class starts and the blog goes quiet for a while. 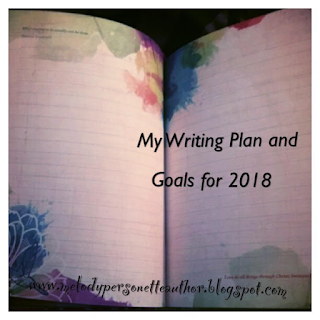 But I hope you all have had a great first week of 2018 full of fun and productivity and writing!

This year I want to get a lot done, maybe a little too much done when it comes to writing. I know I already sort of wrote a blog post on my writing goals, but they’ve already sort of changed in the past week and become clearer. Last week I plotted out the sequel to Weapon Icean for the hundredth time and I finally have a solid plan and already (in typical Melody fashion as one of my friends would say) the plot has already changed so I’m going to have to go back and re-plot again. Oh, the joys of being a pantser. Plotters have it so easy and then there’s us pantsers who live in constant organized chaos, making it hard to actually plan out a book and a publication date and stuff. Such fun.

But seriously, I am so excited for this draft. I really think I’ve figured it out. I’ve finally found the story that Delphi has been wanting to tell! It only took a whole year. So now, all I have to do is pretty much rewrite the first draft I wrote for Nanowrimo 2017 and then revise and probably rewrite again because my books love to make things hard for me. I can tell you all with absolute certainty that the sequel to Weapon Icean will be out in December this year. I am determined to make this happen and it will happen. I’m also trying to decide if I want to go through Weapon Icean again and make some changes or tweaks, make that draft better than it is because I feel like I can do better now and change a few things. But, for now I’m staying focused on the sequel and will figure that out later. I have a whole year to do that.

Anyways, so here’s my hesitant plan for writing in 2018 (the fun will be me trying to hold to this plan and stay on schedule since I both like schedules and plans and can never stick to them and feel overwhelmed by them at the same time):


·         Finish rewrites of the WI sequel by the middle or end of February (giving myself a generous amount of time because I always plan on being overwhelmed by classes and other responsibilities).


·         Start revising once rewrites are over and hopefully get that done by the middle or end of March, depending on how busy that month is because we may or may not go on a mini-vacation.


·         Seeing how it’s me, I’ll probably end up doing micro revisions and then edit as best I can. Hopefully get that done by the end of April (maybe??)


·         Send it out to be beta readers. Seeing how I’ve never really had an beta readers, I don’t know how long it takes for them to get back to me or how I’ll decide to do that, but I do know I definitely want to have beta readers. That will probably be finished by the end of May or June-ish?


·         I’m still trying to decide if I want an editor. The last editor who did Weapon Icean was good, but I feel like she sort of changed my book too much. That’s why I want to get beta readers and then just find an editor to do copy editing like grammar and stuff. That will probably get figured out June or July.


·         I also gave my mom a generously long deadline of having the cover done by August, so we’ll see if that happens 😉


Not to mention, while I’m working on all of that, I also want to do revisions on Golden and Silver and I’ve resigned myself to the fact that I may not get to Bronze (the third and final book in my sci-fi alien trilogy) until Nanowrimo 2018, but that just stresses me out thinking so far ahead. And the fact that I’ll have two classes through to May and then one class during the summer (which is one of the piece of cake classes, so that’ll be nice). But I know for sure that if I get nothing else done this year, I am determined to work on the sequel until I am absolutely satisfied with it and make it the best it can be. Plus read up on marketing and how to properly do a book launch and pre-ordering and all that because I want this book to be more professional in how I publish it and everything. Have a real date pinned down and stuff.


So yeah… I guess that’s my game plan for 2018. I’m not really sure why I’m sharing it, but maybe it will help other writers who live in organized chaos and feel pinned in by a book plan to be able to wrap their head around actually planning out a real book launch. Writing a book is hard, but it’s even harder for those who aren’t good at plotting or feel suffocated by the thought of a plot. Our first drafts always turn out ridiculously messy, but also full of so much potential. It’s like one of those little archaeology kits that you get at the dollar store where you have to chip away at the rock until you get to the dinosaur bones in the middle. From the first draft on I have to chip away at my book until I get to the real prize under all of the filler and plot holes and grammar mistakes. It’s a lot of work and takes a lot of time and energy and sometimes, I can’t help but think maybe it’s not worth it. Why do I even bother? But then I get to the center, to the prize and I feel amazing and like all of that work was worth it. That’s been the mantra getting me through rewriting Silver and now rewriting the sequel to WI, it’s a lot of worth, but it’ll be worth it in the end.


Don’t let all the daunting hard work ahead of you scare you. Massive rewrites used to scare me and usually I would just give up on the book. But last year I’ve sort of taught myself not to give up. Massive rewrites are daunting to me and still scare me, but then I push past that and get to work because I know it’ll be worth it in the end.
I hope you all have a great, safe, and productive new year!