December 01, 2017
Hey everyone! So I completely missed the last day of November... It was a crazy day and its been a crazy week... But! Happy December! We've started out advent calendar, neighbors have their Christmas lights up, our mini village is almost completely set up and Christmas music is everywhere. The best time of the year! 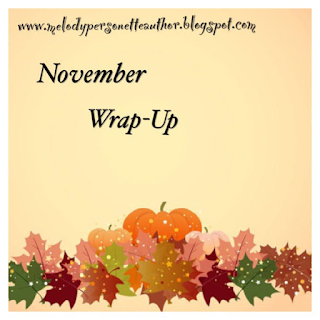 November Writing: November was Nanowrimo as I'm sure most of you know! I hope you all made it to your target word count and/or finished the draft of whatever book you were writing. This Nanowrimo was sort of difficult for me. I fell behind a few times. Project Khione is a hard book to write! But I was determined to get it done and now I have a 53,000 word first draft that I think I can work with. It's going to take some time, but I think I can turn it into something even better than the first book. Also, halfway through I started working on a plot bunny. I needed something to stretch my creativity and give me something else to focus on so I'm working on that. It's weird and a total genre hybrid, but those are the best kinds of books, right?

November Reading: What did I read this November? Oh yeah, just Nightfall!! The sixth book in the Keeper of the Lost Cities series! It was amazing and I loved it and I am dying for the next one! Not to mention, the short story in the Exclusive addition was the absolute perfect way to finish the book. Shannon Messenger is a genius! She even said on Twitter that the big reveal/plot point for a major character had been planned since the first book! It blows my mind how prepared and organized she is with this amazingly awesome series. Before I got that book though, I read Renegades. Compared to Nightfall nothing can compare, but Renegades was pretty goo. I wasn't too happy about the whole main character having two dads thing, but whatever. There's nothing I can do about that, even though it was very annoying. Another reason why I love Shannon Messenger, so far she has kept her books clean and separate from politics, how a book should be. Especially a fantasy/scifi book. Just a few days ago I also started reading The Hearts We Sold by Emily Lloyd-Jones.

November TV Shows: I feel like there was a TV show that I binged in November. A new one, but I can't remember which one. Shannara Chronicles season 2 ended. Season 1 was good, but I had a hard time staying into it. Season 2, however, was a hundred times better than the first season. It was epic and awesome and very fantastical. Besides the whole Eretreya (or however you spell her name) and Lyria thing, it was a seriously awesome season and the ending was a major cliffhanger. I can't wait for the next one! I just watched the Supergirl/Arrow/Flash/Legends crossover, Crisis on Earth X and I have to say, it was seriously one of the best crossovers I've ever seen. The CW's DC has created their own Justice League. I don't need or want to go see the new Justice League movie, the only reason I would is for Wonder Woman, but other than that I'd rather have my Arrowverse Justice League over the movies' Justice League any day. Plus Captain Cold returned as Citizen Cold and I was so happy to see him even though he isn't the same Captain Cold that was in the first one. Hulu's Runaways started as well. I watched the first three episodes and liked it. It's not my favorite... a little too adultish for me, but I like the idea of the Runaways so I'll probably keep watching it. Yesterday I also finished for the first time ever! Watching The Vampire Diaries from season 1 to the very end, season 8. It took me a good while cuz I was on and off for a bit, but I finished it. This was the second time I've watched the final season and the series finale and I cried... just as much as I did the first time around. I don't know why I do this to myself, but I seriously love TVD and it hurts every time I watch the finale knowing that it ended. :(

November Life Stuff: Well, let's see... There was Thanksgiving. We went to my grandparents and had a good time there. Ate yummy food and all that. I wrote a lot and didn't write a ton of blog posts like I wanted to. All I know is that November felt like a really busy month for some reason. We didn't do a ton... but it was a busy classwork month too. I have three weeks left and I'm hurrying to get my study guide done and actually be prepared for the exam this time and write a Movie Analysis paper, which will actually be one of the more fun papers I've ever written.

So yeah, there's November... overall it was a pretty boring, uneventful yet busy month. Now onto December! Classes end in three weeks, the second season of Trollhunters comes out on the fifteenth (me and my little brother are excited and I'm think it's awesome that I have something that we both love in common and can talk about). Our zoo has their zoo lights up and a brand new Santa's Village that looks awesome. We went a few days ago during the day, but I think nearer to Christmas we'll go when it's darker out to get the full zoo lights experience. I'm hoping that by the end of December I'll have this new project that I'm working on done, will have either revised Silver or finished Bronze. I'm still deciding on which I want to do first...

I hope you all had a great Nanowrimo! I plan to (hopefully) get a blog post done about why I'm not going to be rushing to get the rest of my books published I want to take my time and do them right and make them the absolute best that they can be. So hopefully I'll have that written in time for next week! Have a great first week of December everyone!