Five Must Haves for a Nanowrimo Pantster

October 25, 2017
So, this is kind of a cheat post (again). I'm going easy on myself, but I really wanted to post something since I've barely posted all October. It's been... quite a busy month. Lots of work and classwork and going places and all that. I haven't been sick in almost five-six weeks and I think that's a record. But I have caught another cold. I joke about jinxing myself, but I am seriously reconsidering shouting to the world that I haven't been sick for five weeks because a few days ago I was telling my aunt that and she said don't jinx yourself! Well guess what? The next day I got a cold. It's not a ridiculously horrible one, but it's still not fun...

Before I get into the post I just wanted to say, I finished Silver!! After two months, I finally finished the sequel to Golden and I am not only so proud of myself for sticking with it and loving it the whole time, but also super excited to dive back in and get revising. But I'm going to wait till after Nanowrimo to work on that, since I'll be working on Project Khione for the month of November.

Speaking of Nanowrimo, I'm still relatively new to Nanowrimo, compared to others. I've done it for about... two-three years now? It's always fun and I always get so much done that month, but writing for a whole month to reach 50,000 words can be hard. You need the right tools and the right mindset, especially as a Pantster. Pantsters write by the seat of their pants, they don't plan stuff out. They let the story take them to crazy, weird places as they write. Which is an amazing thing, but can also be difficult when it comes to sitting down and committing to a project for a whole month. Especially when you start loosing the motivation or love for the project that you had at the beginning. So here's five things that a Pantster needs to keep going and not give up! 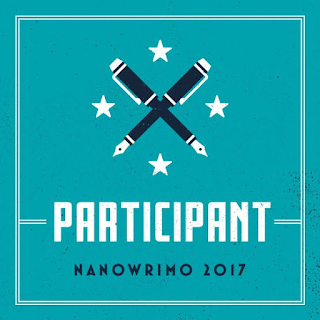 I'm very excited for nanowrimo this year. And also a bit... nervous. I'm nervous that I won't accomplish my word count this year. Project Khione has been a major struggle for me all year. It's been in the back of my mind, near the top of my To-Do List since I finished the first draft. Since then I've published Of Magic and Mayhem and written two whole books! The first in a series and it's sequel and it's very exciting. Right now Golden and Silver and soon to be third book Bronze, are just for me. Renee feels very personal to me. The whole story does really because I feel like I've channeled (indirectly, of course) some of my personality and experiences into the story. I don't know when I'll be ready to share them, but I will when I'm ready and when I feel that these books are ready. I don't want to rush into things like I did with Weapon Icean. I want this series to be different, better because these characters deserve the best I can give them. So, yeah, I'm excited, but also timid about Nanowrimo. Nervously hopeful. But I think I can do it and so can you!!