10 Reasons Why Animated Shows Inspire Me as a Writer

September 06, 2017
So I started writing this post a few weeks ago when I was feeling uninspired and I realized something about myself as a writer. Usually, when I'm out of inspiration or my muse isn't talking to me or I just don't feel motivated to write in the least bit, I turn to a form of entertainment to refill my creative cup. Sometimes its books, but most of the time it's TV shows. 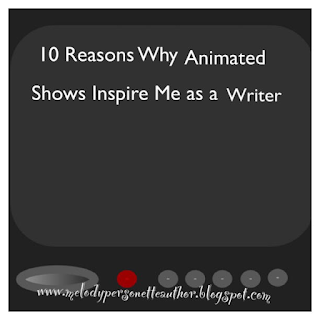 And a lot of the time it's what would be considered "kids" shows. Though I've learned that there's this weird in-between genre when it comes to animated shows. Shows that are meant for upper age kids, like eleven, twelve, thirteen year olds. There's The Clone Wars and Star Wars Rebels. Max Steel, Danny Phantom, X-Men Evolution, Trollhunters, amongst others. They all fit into this gray area of the tween age. When tweens are transitioning from littler, more simplistic shows and into deeper and more complex TV shows. I find those to be the most inspiring. Why? Well here's a whole ten reasons why!

I could probably write an entire other post about the villains of these animated TV shows and maybe I will, but for now I should probably stop. So there you go! Some things I thought about a few weeks ago and forgot to write down in a post, so I'm doing it now.


What do you think of animated TV shows? What inspires you when you're in a writing rut?
Have a great week everyone!! ﻿