When Your Head is in the Clouds

August 14, 2017
Sometimes I am so full of words and opinions that I must sit down at this blog and write it all out and be really passionate. Blog ideas flood on my brain left and right and I can't catch up with them all or write them all fast enough.

And then there are times when no ideas come and I have nothing to rant about. At least nothing writerly related. And if I do have something to rant about, whether its writing related or not, I just don't feel like sitting down and writing it. I don't feel the burning passion and desire to rant about it on here. I feel like July and sort of now August, have been like that. Like my well of inspiration is dry and I've got nothing, for now anyways. To be honest, I can't be hard on myself because July and the beginning of August have been sort of busy and hard. July has been just a whirlwind of do this and go there and be here and get this done. It was great, but... crazy busy. August has settled, in terms of being here and there and everywhere and I've gotten back into a familiar routine, but, there have been other things that have been occupying my mind. Anxiety and health things that aren't serious, but are just annoying and frustrating and difficult, especially when you have anxiety to blow health things out of proportions and make you sort of feel overdramatic about them. So, yeah, August has been pretty good, but I haven't really had any blog post ideas that are amazing or anything cuz my head's been somewhere else.

I don't know if other writers or creatives get this, but I sometimes like... drop off the deep end. Like I need a serious break from life and don't want to think about anything and life is feeling sort of overwhelming so I just kind of go off. My head goes off to somewhere else and I literally saturate myself in stories and creativity to distract myself. I write, write, write. Plot, plot, plot. My head running twenty-four/seven on writing/plot things. I read, read, read. Devour a book and/or books and just dive head first into the world. I watch, watch, watch. We just got Amazon Prime for a month and I have been without Doctor Who for far, far too long, so I have been rewatching that at an alarming rate and before I had Doctor Who at my disposal I was rewatching The Vampire Diaries and diving into the world of Elena and Stefan and Damon to forget about my problems and just life in general. I don't know if it's evident to the people around me because I'm still present. I still eat and hang out with friends and do other stuff, normal stuff that I always do. Go to parks and church and all that stuff. I'm still just me, but my head is somewhere else, in the clouds. When I'm sweeping or helping with laundry or other things I'm writing stories in my head.

Plots and creating characters and worlds and drowning everything else out.

Have you ever read or watched Bridge to Terabithia? Don't kill me, but I've only ever watched the movie. I'm sure the book is fantastic, but I adore the movie. I watched it when I was younger and I just completely lost myself in how amazingly creative these two characters are. Leslie and Jess lived in another world within this world. They let their creativity run wild and get the better of them and they saw things that others didn't. They were teenagers, but they played pretend like little kids. That idea and the plot and story appealed to my writer side in a big way because isn't that what us writers do? We play pretend. That's like our jobs. To let our imagination run away from us and to live in another world within this world. A world full of spaceships and ray guns and fairies and princesses and dragons.

I really need to watch that movie again, but one of the scenes has always stuck with me. Jess was an artist. He drew fantastical creatures and was creative and wonderful and when he met Leslie, she amplified his creativity because her imagination was off the charts. They saw monsters and creatures and epic battles and a castle and a whole world in the forest behind Jess's house and they used that creativity to deal with the problems they faced every day, like bullies and financial struggles and moving to a new school. Jess's dad was getting really sick of him always running off and never really being present and Jess forgot something (it was important, but I can't remember what it was, like I said, I need to rewatch this movie) really important and he grabbed Jess and shook him and said you need to get your head out of the clouds!

That's what I feel like sometimes. Like my head is in the clouds and I'm just in my own little world that no one else really notices, and that distracts me from important life things that I should be worrying about or thinking about instead. Like actually getting my drivers license and getting ready for Fall classes and all that boring, life stuff that's no fun. 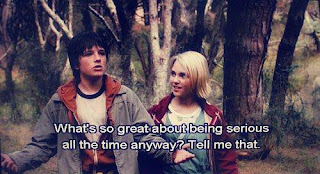 had a point that was I getting to that was about blogging and I almost lost it. But the point is that, when my head is in the clouds and I'm thinking story, story, story, I sort of forget about the blog a little bit. I run out of ranty things to talk about cuz I don't want to talk about life stuff or technical writing stuff. I just want to create and forget about life stuff. But since we live in a world where that isn't really acceptable, to live in a fantasy world and just create all day and not do anything else, I kind of have to push past that and do boring life things that I know I have to do and that I want to do, but that isn't as fun as writing all day and watching shows and reading books and thinking up whole worlds and breathing life into characters on a page. But I think that's why movies/books like Bridge to Terabithia and The Spiderwick Chronicles (again, I watched the movie, but not the books) appealed to me when I first watched them and still does appeal to my writer side.

Anyways, so this is all kind of one big explanation as to why I haven't been writing so much on here lately, cuz I'm kind of out of ideas as to what to write and I'm kind of busy. Not just with writing and just being in the clouds, but also with getting Of Magic and Mayhem ready to be published and then getting ready for classes and hanging with friends and thinking about the future and getting my drivers license. But I hope this post doesn't make you think that I'm crazy or something and I really hope there are other writers out there who feel the same way. So yeah... those are my thoughts and my little gushing sessions about Bridge to Terabithia. Maybe I'll write a post about The Spiderwick Chronicles too, cuz I love that movie too.

I hope you guys have a great week!