March 24, 2017
Since I've been so busy to hardcore work on my latest WIP and since I'm just revising Project Khione now, like basic print-out-pen-to-paper revisions I've had to found different ways to get keep my writing muscles strong and to get my creative fix for the day. So while working the third draft (a complete rewrite) of Phoebe and Jasper's story (my soulless gypsy girl and in love vampire) I've been doing some short stories here and there and I thought I would share one with you guys. This idea of the Mora'gan and Prince Roanake (Roan or Ro) has been rattling around in my brain for a while. One of these days they will get their own story but for now they'll just have to settle for the occasional short story. 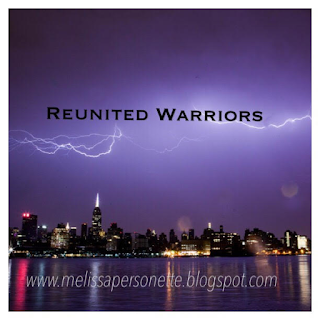 
The girl cradled her green mug between her hands, staring out the café’s window as rain pelted the sidewalk. Thunder clapped in the distance, followed by a white streak of lightning. Her fingers tapped restlessly against the side of the warm mug while one of her toes tapped out a nervous rhythm under the table. To the barista behind the counter the girl looked worried, on edge as if she were waiting for something… or someone.


“Can I get you anything else?” A young woman with frizzy brown hair and an apron tied around a floral dress stopped in front of the waiting girl.


The girl, Morgan, glanced up at the server and forced a smile. “No… thank you. I’m fine.” She turned her attention back to the window where the storm was growing more fierce and bold with each lightning strike.


“Well I hope you aren’t planning on leaving any time soon. The storm’s getting pretty bad,” she said before walking away.


Yes, yes it was. And that was exactly what Morgan was waiting for. Each thunder clap was a horse’s hoof beating against the clouds, and each lightning strike was the edge of a swinging sword. Morgan did plan on leaving soon but not by car or by foot. He’d promised to be here soon. A week ago after the fall of his father and the destruction of the portals, Prince Roanake had taken Morgan’s face in his hands and kissed her with a fierce determination. The sweetest and yet most bitter kiss Morgan had ever received. She ran her tongue over her lips, remembering the taste of his grief and the blood from his split lip on her mouth.


“Go. We cannot be seen together… but I will find you,” he’d whispered urgently when he let her go. Morgan had gone breathless from his desperate kiss and she’d wrapped her arms around his neck as if to keep him there with her forever. “Where? When? How will I know your safe and you, me? I can’t part with you… especially now that we both hold new roles to fill.”


He’d shook his head and pried her hands from around his neck even as she could see the pain of forcing her away from him written on his face. “Meet me… at the first place we met. That café that sells that foul drink. I will see you there in a week’s time and if I do not return, then keep coming every evening until I do. I promise Morgan, I will come for you.”


Morgan had nodded and stepped away from him in the middle of the battle field, amidst all the death and carnage. Fallen soldiers, civilians screaming and running for their lives and yet there they were. A prince turned king by the death of his father and a mortal girl turned warrior by the destiny given to her by the stars.


With one final kiss, they parted and ran in separate directions. Raonake, back into the fight to save as many of his soldiers and civilians as he could and Morgan, to the nearest portal to escape.


Now there she sat, practically on the edge of her seat waiting for the storm to turn into something more. For lightning to strike the ground and for her king to appear. She’d spent the whole week on edge, staying out of sight and away from any portals. Her parents would be worried sick when she didn’t come home tonight but it couldn’t be helped. Destiny came before her mortal life. Morgan had learned that when she was first called to be the next Mora’gan. She was to stand at her king’s side and lead his armies with her magic, to defend the Lands from those who would seek to destroy the Fae life and to uphold law and order by any means necessary.


Morgan took another deep sip of her white mocha as it began to hail. Thunder struck again and she jumped as lightning flashed right outside the front door. The barista and server shrieked and jumped back. The sound of shattering glass filled the air as Morgan sucked in a sharp breath.


There in front of the door, drenched in rain and being pelted by hail, stood her prince. He wore what he called his “mortal” clothes to fit in. Jeans and a t-shirt under a simple black leather jacket. Morgan jumped out of her chair and ran through the front door, the bell over the door jingling wildly.


“Ro,” she shouted and threw herself into his arms.


She heard him let out a deep sigh as he wrapped his muscular strong arms around her small waste. He practically lifted her off the ground as he kissed her cheek. “Morgan. I was so worried… I worried for you,” he whispered.


They pulled away, their hands still clasping each other’s arms. Roanake’s eyebrows furrowed. “To leave your family and life? Morgan… I can’t ask that of you.”


Morgan shook her head, her eyes fixed on his face. His sharp jawline, his tan skin that had seen too much sun and the black hair falling into his crystal clear blue eyes. “You don’t have to ask me. I want to go. I have to go… my life isn’t here anymore.”


“But leave your family?”


“You’re my family now. And my responsibility. There can’t be a king of the Fae without a proper Mora’gan to keep him safe.”


He gave her a small smile and pulled her into another hug even as hail pelted their heads and rain soaked them through. “Then let us go,” he whispered into her ear.


Morgan held on tight to him and watched as he raised a hand. Thunder rumbled in the distance, shaking the ground and lightning struck them. There was a zing and electricity zapping the air and then they were gone, riding the storm away to the Lands where they would have to struggle to regain their home and their mantels as newly appointed king and his Mora’gan. Together they would succeed.


Inside the coffee shop the girl’s mug shattered into pieces on the floor as the server stared, jaw dropping, at a lightning bolt struck and took the strange girl and handsome guy with it.