March 03, 2017
Hey everyone! So I didn't get a post up on Wednesday. I've had a cold all week and just have been feeling tired and weird because of it. Anyways, right before we got on the plane for Disney, like at the airport in the terminal I finished Roseblood and it was great and I wanted to share what I thought with you guys! 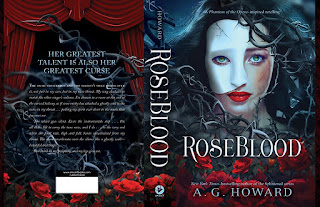 I went into Roseblood having waited forever to read it! I love A. G. Howard's Splintered series and own all of them on the Kindle. The only reason it took me so long to finish Roseblood (like it's taking forever for me to finish Starfall) is because I've been so buys with writing and class work (plus TV shows are just as important to me as books) otherwise I would have finished it much sooner.


When Howard came out with her New Adult novel I bought it and started reading it expecting to be wowed like I was with Splintered. It wasn't as... good as I thought it would be but that may because I'm eighteen going on nineteen and I love me lots of Young Adult and not so much adult stuff still... not even New Adult (I'm a child at heart). But anyways when I heard Roseblood was coming out I was like yes! Finally another YA book by Howard! Plus I mean it's a retelling of Phantom of the Opera! I have never read the book or saw the movie but I listened to the one song... yeah I know I'm not really into the classics unless its old folklore and myths and stuff but I loved that one song and I loved the idea and the plot and the feel of what the Phantom of the Opera is. So I was psyched to hear she was making a Phantom of the Opera retelling, especially after seeing the amazing things she did with Alice in Wonderland. And I was not disappointed.


I was surprised, and taken aback, and inspired by all the twists and turns the book held but definitely not disappointed.


I won't give any spoilers but I love Thorn. He is the love interest and the second protagonist of the book and Howard did such an amazing job with him. Thorn is an extremely complex character with deep meaning, unique personality and an even deeper internal struggle that leaves you emphasizing with him and loving him. A war is always going on in his head between the two people he loves the most and it was very intriguing to see who he chose, if he did "choose" at all because how could you choose between two people you love so much that it would pain you to lose either of them?


The main character Rune was pretty much just what I expected from A.G. Howard. Quirky, three dimensional, with fears and loves and hates and who has an eye for fashion. I loved the unique, dark, sort of Goth but also sort of steampunky fashion of Alyssa in the Splintered books and was hoping for more descriptions of the same sort of quirky, vibrant outfits from Rune and yet again I was not disappointed. Rune herself with her gift of music that slowly unravels and reveals itself and it's secrets to you and Rune as the book goes on took me by complete surprise. By the middle of the book you'll stop and be like whaaat?? I was not expecting the book to go that way! At least I didn't anyways. I wasn't sure what to expect from this book except for a great story so I was taken off guard by the big twist in the middle.


But besides the vibrant and very real, quirky characters the story itself that Howard created is rather dark and macabre. Yet again something I was expecting... only not to the point she took it. I loved how the Splintered series was a darker and slightly more morbid version of Alice in Wonderland and was yet still beautiful and mystical at the same time. Roseblood had the same feel to it, though some of the things -- most of the things -- in the backstory was much more disturbing and dark and slightly creepy than I was expecting... Not to mention some of the content is kind of mature. I definitely wouldn't recommend this book to any 13 or 14 year old.


Without giving any big spoilers away this Roseblood was great and a twisting and turning ride of secrets revealed and magic. I highly recommend it to anyone who loved her Splintered or New Adult series.

Wishing you all a great weekend!!