Friday in Review: Even if the Sky Falls

June 17, 2016
Hi everyone! Last week I was in Kentucky with my grandparents and so of course we had to stop at Barnes and Nobles. I was checking out the books in the Young Adult section and it was a hard decision to choose between so many books. I hadn't been in Barnes and Nobles in forever so there are plenty of new covers, new stories to check out. But ultimately I decided on Even if the Sky Falls. Mostly... because of the cover. I mean look at it! It's gorgeous and beautiful and I just sort of had to have it on my bookshelf. So I bought it and started reading it and I just have to say its one of a kind.

I don't think I've ever read a book that has a story that happens in exactly one night and a morning. You say, that's impossible! No way the Mia Garcia could have done that! I said the same thing and then I read it and nodded in approval. She did pretty amazing for writing a book, a girl's entire story in one night. 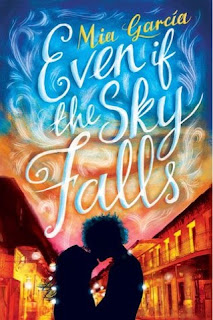 All she needs is one night to be anyone she wants.

Julie is desperate for a change. So she heads to New Orleans with her youth group to rebuild houses and pretend her life isn’t a total mess. But between her super-clingy team leader and her way-too-chipper companions, Julie feels more trapped than ever.

In a moment of daring, she ditches her work clothes for DIY fairy wings and heads straight into the heart of Mid-Summer Mardi Gras, where she locks eyes with Miles, an utterly irresistible guy with a complicated story of his own. And for once, Julie isn’t looking back. She jumps at the chance to see the real New Orleans, and in one surreal night, they dance under the stars, share their most shameful secrets, and fall in love.

But their adventure takes an unexpected turn when an oncoming hurricane changes course. As the storm gains power and Julie is pulled back into chaos she finds pretending everything is fine is no longer an option.

I've always been fascinated by New Orleans. There's so many mysteries and stories hidden in that city, ranging from vampires to ghosts to witches. Plus it just seems like such a... historical and colorful place, especially on Mardi Gras nights. Mia Garcia does not disappoint. The main character Julie leaves behind her youth group and unknowingly runs straight into the heart of the Midsummer Mardi Gras where she dresses up as a fairy and meets an incredible boy with blue hair. There's dancing and music and poetry and color and costumes and a bit of Shakespeare and I have to admit I loved every bit of the characters and every bit of the setting and story.

What I didn't much appreciate was how the author portrayed Julie's youth group. It wasn't clearly stated in the book but I think she came from a very Catholic family. Which is fine. I don't mind that... as long as you portray the church youth group and Catholicism and their faith in God correctly. Which I believe Mia Garcia did a poor job of. She went for the very secular, worldly approach. I guess I shouldn't have been surprised but I was. Julie's youth group leader is a clingy teenage guy who likes to hold hands and hug for too long. He crosses boundaries that Julie doesn't want to crossed by always being too close to her and asking her questions about a past she was trying to forget.

As a non-Christian or non-Catholic reader you get the impression that youth groups are horrible things. That the leaders and teenagers are all perfect and overly happy and so clingy and annoying. That's not true. Being Christian and going to several different youth groups all over the place I know for a fact that there are optimistic, beautiful people who shine for God. They feel compassion and want to always be there for others. To let them have a person to talk to. And then there are those that, like Julie, don't actually believe in any real God or faith but are forced to go by parents or by some sense of commitment. And every one of those people from the sunshiny-God praising kind to the just-came-to-hang-out-with-friends kind have their problems and no one person is going to be as happy or joyful or annoyingly optimistic twenty-four/seven like Julie portrays them as.

Julie doesn't take her faith seriously. A non-Christian would see her as a hypocrite for going to youth group and professing to be a Christian or Catholic and then go run away from her youth group and spend a whole night with a boy she just met. She swears, spends a few intimate moments with a boy she just met that night! and says that instead of praying to God (because you know why would you do that while saying your a Christian? And why think that God can do anything or help you in a difficult time in your life?) she prays to her grandmother. That whole part of the story did not resonate with me well and I couldn't get deeper into the story or Julie as a character because of that flaw.

I know there are tons of people like that, who's faith runs at the surface level and no deepr and tons of story written by secular authors who aren't believers themselves and I know that maybe she had a bad experience in the youth group but... does that mean the author had to portray faith and Christianity in such a secular way? I honestly don't think unbelievers should write about Christianity or any other sort of religion or faith for that matter, because they have no idea what its like and they have no idea how a true believer, a true Christian would react in difficult situations because they've never believed in anything, not deeply and richly and so truly that you change your entire life and suffer persecution and hardships for what you believe in, for your faith in God.

If I was Julie I would be clinging to my faith, to God to help me. She turns her back on him and tries to deal with it on her own. Where does that get her? Running from her problems in the middle of Mardi Gras, broken, depressed and confused.

All that aside the ending was... ok. It wasn't amazing or anything and I rushed through it. It was the kind of ending that you could skip through paragraphs and pages to gauge the idea of what was happening. I pretty much skimmed through the climax and skipped to the end to know what happened. The love story between Julie and Miles was sweet and beautiful and colorful but... I mean after one night together you leave the story with a sense that their relationship won't go too far.

Overall though, the characters are awesome. Julie and Miles were the one thing that drew me into the story. They are both broken and yet wonderfully vibrant characters that leaped off the pages and I did like reading their story. It was enjoyable besides the few parts of the overall story that irked me. And... I think this post has sort of become a big, giant ramble so I should probably end it here. But I hope that everything I said makes sense because I just sort of wrote what I felt without really thinking.

I hope you all have a great weekend!


What do you think of the cover and what I've said in this review?