May 27, 2016
Hey! So again with the no post on Wednesday. We were out of town and it was pretty crazy but I'm back and surprise, surprise it's a book review on a superhero book. 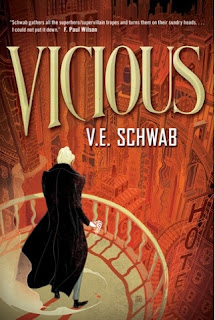 Victor and Eli started out as college roommates—brilliant, arrogant, lonely boys who recognized the same sharpness and ambition in each other. In their senior year, a shared research interest in adrenaline, near-death experiences, and seemingly supernatural events reveals an intriguing possibility: that under the right conditions, someone could develop extraordinary abilities. But when their thesis moves from the academic to the experimental, things go horribly wrong. Ten years later, Victor breaks out of prison, determined to catch up to his old friend (now foe), aided by a young girl whose reserved nature obscures a stunning ability. Meanwhile, Eli is on a mission to eradicate every other super-powered person that he can find—aside from his sidekick, an enigmatic woman with an unbreakable will. Armed with terrible power on both sides, driven by the memory of betrayal and loss, the archnemeses have set a course for revenge—but who will be left alive at the end?

So I'd sort of heard of V.E. Schwab. I've seen pictures of her latest book A Darker Shade of Magic and thought it was a cool cover and I've looked up the synopsis of it and faintly thought that maybe I'll get around to reading it at some point. But for some reason I was captured by Vicious, one of her other books and so I got it from the library and started reading it.

It took about a chapter or two for me to really sink into the world and characters because Schwab started with Two Days Before the present and then switched to Ten Years Ago when Victor and Eli (the two main characters) were in college. They both were the type of students that got straight A+'s. Sort of genius's and I think both of them were premed students. It all started when Eli decided to do his thesis on the idea of EO's -- ExtraOrdinaries. I really loved the science behind EO's. They're created by near death experiences. To become an EO you have to literally die for a few minutes or even a few seconds, like no heartbeat, no nothing and then if your revived your entire physiological and psychological makeup has changed. So these two sort of stupid college guys decide to try and kill themselves and succeed. Eli dies and is revived fairly easily and comes back with a power. Victor's journey is a bit more difficult. He tries once and fails and tries again and wins with consequences. And as the book goes on Victor and Eli's story unravels and you find out why they hate each other so much in the present.

What I love so much about this book and the characters is that there is no good guy and no bad guy. Both Eli and Victor have done bad things. Eli does bad things for his faith and Victor does bad things for good reasons. Even the side characters Sydney (who I loved!) and Mitch were in a strange gray area of light and darkness. And throughout the whole book there's this battle within each of the characters. Are they meant to be this powerful? Is it natural or unnatural what they can do? Do some of them deserve death while others deserve life? Is there a hero and a villain or are there no heroes and villains in these character's stories? The boundaries between good and bad are blurred and at several points in the book every character crosses the line. But that's what made these characters and book so appealing. All of the characters are flawed. Tragically and beautifully flawed and they have to try and deal with those flaws as Victor drags Sydney and Mitch on a crazy revenge plot while Eli teams up with a siren girl who can control anyone with just her voice.

These seemingly normal, random characters all cross paths and it's wonderful. I love how Schwab switched from past to the present, giving each character a moment to shine and tell their backstory, their point of view and why they're doing what they're doing. By the end I wanted more and so I quickly looked up other books that Schwab has written and am now waiting for them to come in at the library. I can't wait for the sequel to Vicious though I'm not sure when it's coming out since it seems to still be in the works. But I ended the book wanting more. Wanting more of Victor, mostly because he's such a vicious and deep and complex character. A kind of character that I don't see too often in books.

And besides the amazing plot and even more amazing characters is Schwab's superb writing. Her writing kept me going through the first two characters and then quickly ensnared me in the story of two friends and two enemies. The ending was amazing too. I was so surprised and it was a good ending though it leaves you wondering what's next for all these characters.

There's so much more that I could say but I don't want to give away what powers they have since it's kind of a big deal or the ending or... any of it. So if you want to know more just go get the book and read it! And then go get V.E. Schwab's other books too because I'm positive they're just as amazing. After finishing Vicious I could not even pick up another book without feeling like it couldn't measure up to what I just read. But go get Vicious and read it if you like superheroes and complex, darker characters.

I hope you all have a great weekend!


What are some of your favorite superhero books? Have you read any of V.E. Schwab?