Friday in Review: The Betrayal of Renegade X

April 22, 2016
Welcome to my first Friday Book Review! I'm getting back into the swing of writing book reviews so don't judge too harshly. This review may be a little rough but I hope you like it and the book anyways. :) Here's the cover and synopsis to The Betrayal of Renegade X: 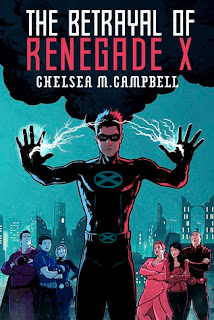 Damien thinks he has the whole hero thing figured out—he's getting good grades at Heroesworth and acing all his missions—at least until he zaps an unarmed bad guy he believes tortured and murdered children. It turns out the “bad guy” was actually a superhero working with the school. The mission was staged, and Damien blew it.

Now his best friend refuses to work with him, his dad is considering getting him professional help, and everyone's questioning whether or not he has a future as a hero—including his grandpa, who will do anything to ensure Damien's future lies in villainy. His grandpa creates a villain organization called the Truth, intent on exposing the way heroes really treat villains. But when the Truth launches its plan and the whole city erupts in chaos, Damien is caught between the opposing sides, and his future is anything but certain.

With heroes and villains bent on destroying each other, it's up to him to do whatever it takes to stop the fighting, even if it means betraying the people closest to him.


So I found Chelsea Campbell's YA Renegade X series a few years ago and I fell in love with her main character Damien from the start. Her series isn't as clean as most of the series or books that I read but it's also not filled with crap either. If it was I would have turned away from the series.

What I love so much about the Renegade X series is that it is all about superheroes. It's set in a world where being a villain or a hero and getting super powers is hereditary. If your from a family of heroes on your sixteenth birthday you get a H on your thumb. If your family is crawling with villains you get a big V on your thumb when you turn sixteen.

Damien the main character grew up with a laser eyed super villain for a mom and with the expectation that he would get a V on his thumb during his huge blowout sixteenth birthday. Turned out... he was sorely mistaken. Instead of a V he got an X and quickly realized that the father that he ever knew was not just any guy. He was a superhero. A flying superhero.

Skip ahead two book and you come to The Betrayal of Renegade X. Damien has been living with his superhero dad and his family for a while now, his mom has moved on from him and Damien's trying to start a career as a good guy instead of as one of the bad guys. I think the reason why these books are so compelling is because of poor Damien. You feel bad for him from the start. He grew up with one expectation only to get something completely different and almost always being hated on. No one trusts him because he's half villain and because of his deadly electricity power. Everyone is always making assumptions and never truly listens to what he has to say. The poor guy is always getting into trouble that he gets blamed for but didn't necessarily cause.

In this book it's no different. He accidentally almost kills a superhero posing as a villain because he honestly thought he was saving lives and stopping a very bad guy from getting away. Does anyone around him believe that? No. All they see -- including his father -- is the fact that Damien almost killed a hero which gets into trouble and into some sticky situations. Not to mention his villainous grandfather on his mom's side wants to recruit him for a secret villain society. Damien is tugged in two different directions, desperately trying to figure out how to please both sides of his family and both sides of himself.

He wants to be a good guy and he wants to impress his dad, to make his hero family proud but he also doesn't want to let his grandparents down either, especially since their secret society has a valid reason for coming to the light. I think that's one of the most attractive and interesting things about this book and the rest of the series. Throughout the last three books Damien has had this inner struggle but in this one it feels to me like it's more prominent because of the physical interpretation. He's constantly trying to figure out his values and his morals for himself while having several people on both sides whispering into his ear and trying to tell him what to think and what to believe and what side to be on. Damien can see both sides. He can see why the villains do what they do but he can also see why the heroes want to stop the villains.

Not to mention the fact that not only is all of this happening but he's also just a sixteen year old sarcastic boy going to a school for superheroes. Damien can't get a break, can he?

The rest of the cast is vibrant and fantastic as well. He's got a super villain girlfriend Kat, an inventor best friend and several superhero friends too along with a morally sound hero father, stepmother and three step siblings. All the books are fairly well constructed and there's something always going on. Like I said there's little to no swearing, a few kissing scenes but nothing explicit and a lot of action and a lot more sprawling dialogue scenes between two to several different characters. Plus it's a superhero book! A good one too which are hard to come by so go check out the first book, The Rise of Renegade X and then work your way to this one because I promise you Damien is worth the read.

I hope this review didn't stink too bad and I hope you all have a great weekend planned out!

What do you think of The Betrayal of Renegade X? Have you heard of the series? Or read it? ﻿