Join the Dark Side: We Have the Cool Characters 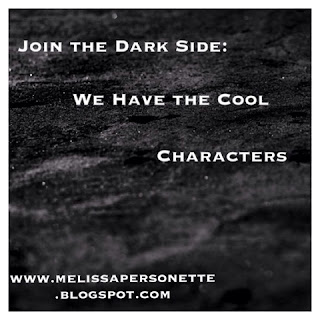 Hello everyone! Hope your all having a great week. I woke up this morning to snow covering everything outside so of course we'll all be out sledding and playing later today.

Anyways, last week I was talking to my dad in the car and he loves the show Supernatural but I don't watch it so usually he just tells me what's been happening and he started talking about the two main characters Dean and Sam Winchester. I don't watch the show so I don't know who's who but he was saying how at the beginning one of the brothers was like the sort of "bad brother" and the other was kind of the "good brother" but as the show went on each of them started to show different qualities and the "good brother" ended up having some darkness in him. 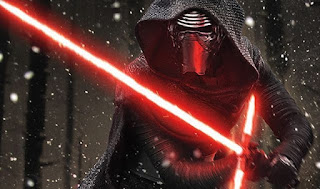 (Because he's awesome and I love his mask.)


So during the conversation in the car concerning the Winchesters I said something very true (yes I am a genius;). Those dark and broken characters are attractive to us as human beings because they are the characters that embrace and show their darkness. Kylo Ren, Damon Salvatore, Loki and Morpheus to name a few.

Their appealing to us because as humans we all have a dark side. We try and hide it and we all do a pretty good job of it but no matter how hard we try to stuff that sinful, dark part of us down we still have it and we can't get rid of it and that's the thing with these characters. They don't try to stuff it down or hide it. They show it off and say yeah I am flawed, I do have darkness and I'm going to embrace it and they have the potential to change and evolve and become a better person. That's what makes them so real because usually they have a good side too no matter how miniscule it is compared to their dark side.

Those characters are real with us. They don't hide their dark, difficult, or broken pasts. Real people sometimes do try and hide the hard parts of their life. They don't want to think about it and they don't want other people to know but those dark characters accept and embrace their difficult pasts and realities and move on (maybe not in a good way but nonetheless they do move on).

And I think that is why we as human beings love the bad guys so much. They appeal to the subconscious part of our minds that know we're sinful creatures. I'm not sure it's a good thing that that happens but it does. Plus almost all brooding, dark bad guys that I've come into contact with (sadly not in real life) have had so much more depth to them because of their double sidedness. The best bad guys have something good to them that appeals to our lighter, good side while also having a dark side that attracts our darker side whereas most good guys may have a tragic back story but it's usually cliché and their usually all good without too much badness.

They were orphaned as a child or their parents were killed or they just had a difficult childhood and yes its inspiring that can move on from all of their difficult backstories but the best characters are double sided. They have their dark side and their light side. Like Stefan Salvatore. At the beginning he was the "good brother" but turns out if he drinks human blood (he's vampire) he becomes a ripper and that's as bad as it can get. Therefore Stefan is more real to us because he isn't the perfect, brooding hero. He has a bit of darkness in him too like us.

Anyways, that's my take on why most of us like the Dark Side. Because the villains are real with us and vulnerable and have complex personalities that make us love them because they're going through so much and the world always seems pit against them and then we just want to help them and make it all better.

That is why Kylo Ren is one of my favorite characters in The Force Awakens though I have to say Rey is pretty awesome too. She's got the potential to be something really amazing. I can't wait for the next movie.


Who's your favorite bad guy and why? What did you think of The Force Awakens?