September 03, 2015
Due to the fact that I've been at a funeral for the past... three days I believe? this post is a bit late but that's OK! Because I'm writing it right now and because I kinda... am writing it the day its going to be posted its going to be a bit about my book Discord. Next week, will be a more scheduled post. Anywho, I'd like to share a little bit about Discord though I don't exactly have a very good synopsis for it yet.
(Pictures from Pinterest. Not mine. Collage for Discord) 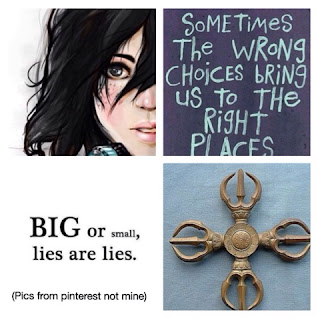 To start I want to share a little about where Discord is at in the writing process. I have a beta reader or two reading it right now and giving me feedback which is amazingly helpful and its on Draft Five. I am very excited about Draft Five since the last four drafts have been crazy busy and tedious and long a little exhausting but so worth it.

Here's a few facts on kitsunes and nogistunes and white wolves that I found very interesting and helpful in the process of writing this story:

Discord is about a kitsune  named Stella Akiyama who lives in a small town and is surrounded by her clan which consists of Damian, Jasper, Josh, Hiro and Nadia. Five years ago she fell in love (at twelve) with a nogistune named Kage. When her mother and father (her mother is human, father kitsune) found out that she was consorting with a nogistune they called for Damian and a Hunter to take him away. They throw him into the Kitsune prison world -- the Void -- and for five years Stella gets along on her own.

But then a clan of kitsune traitors let a few creatures out of the Void and Kage gets out as well. He finds Stella and that's the beginning of how her predictable, rather happy world falls apart. She's bombarded with questions about the Dynasty -- the council of kitsune leaders that rule over all the kitsunes from Japan -- and meet mythical white wolves that she didn't think ever existed.

And now I proudly present an excerpt of Chapter Two of Discord to close out the post (hope you enjoy!!! Please no copying or pasting of this excerpt):

Damian drives me crazy. Why does he have to be such a kill joy? It’s like if he can’t enjoy life than no one else can, especially me. I stare into Mandy’s Diner noticing the smile on Avery’s face and the way her head is turning while she talks. She must have gotten Jack’s number and the thought of Avery being happy chases away my dark mood.


I reach for the door knob but before I can go inside a hand flies out and cracks the door open for me.


“Allow me,” a smooth voice says from behind me. I go stiff. Why does that voice sound so familiar?


Goose bumps run up and down my arms and the shadow that Kage left on me years ago stirs. Whoever’s behind me must be a kitsune or someone close to a kitsune. I gulp and smile.


“Thank you–” My thanks is cut off when I turn around to see who is willing to open the door for me. A young man with a head of raven black hair and rich dark eyes that glint dangerously at me stands right there… in the middle of the day… in the middle of town.


My blood goes as cold as one of the rivers rushing down the mountain around us and my legs freeze up. “Miss me Akiyama?” he purrs. I take a wobbly step back but he grabs my wrist, pulling me in close.


“Don’t move or make a sound,” he whispers in my ear, a finger leaving a hot trail down my cheek. I do what he says not knowing what else to do.


There is nothing else to do. The only way I got free of Kage last time was because my mother intervened and we moved.


The Dynasty banished Kage to the Void and had me assigned to Damian a year earlier than I should have been. That was all nearly five years ago. History that I wish I could forget. How did he find me? How did he get back here?


“What… what do you want?” I whisper. He leers, caressing my cheek. I flinch away and he frowns.


“I missed you Stella. All I’ve been able to think about these last five years in the darkness is you. Of seeing you again and now here, you are.” He gestures at me, black eyes trailing over my body and I take a step back, folding my arms over my chest. His smile curves down into a slight frown.


“But… I can see that your spark is dampened… They’ve done a number on you Stella.” The darkness that he had implanted inside of me so many years ago yearns for him, pulling me toward him, his eyes forlorn and sad at the thought of my clan changing me. My rebellious, restless self wants to break free from the chains that I’ve imprisoned it in.


Every cell in my body itches to be near him like before. It’s all I can do to resist. He cocks his head, his eyes piercing me. “Stella, he’s stomped out your fire, suppressed you… Why would you let him do that?”


For a moment, I feel sad with him, knowing full well what he’s talking about. I’ve changed a lot in the last five years, trying to become a real kitsune, one that doesn’t made mistakes, the kind that my father and Damian would be proud of.


I used to be fiery and fun, a tempest that no one could escape and no one could tame. That had been me. Ever since I was, little had a horrible knack for being rebellious and naughty to not only my parents but to anyone else who tried to tether me down. When I got into high school I went to parties and had a good time, in middle school I was the kid that ended up in the principle office at least once a day.


I miss that girl but… I can’t be her anymore. She’s gone and I can’t let her come back or all of my hard work that I’ve been striving toward the past five years will have been for nothing.

There were a few bumps in the road but I’m accepting of who I’ve become and I won’t let Kage ruin all of my hard work. He seems determined to fix me and that will only cause me trouble. ©
Hope you enjoyed this sneak peek of my baby that I have been slaving away at for a while now. :)


What do you think? And what's your latest WIP about??