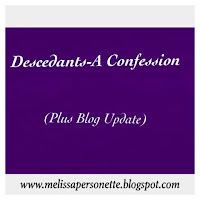 So, to start this post off I'd like to say this I am following through on my TV show review thingy but I'm also going to be changing up the blog a little. The truth is I'm a bit embarrassed to say this but I've kind of run out of ideas to write about well... writing. Plus I'm in a different stage of life than when I first started this blog. I actually got up at 6:30 this morning and was in my World Civilization class by 8 and now I am sort of cranky and tired but I think I'll survive.

I'm getting off topic. Anyways, when I first started this blog my life was writing and now things are a little different. Writing is still one of my deepest passions and I write every day and am revising like a crazy person on Discord while dabbling in the fractured fairytale genre. But now I also have college classes, a college group at church that I attend every Sunday. There are books and TV shows, and friends and just life in general that I have going on too. Not to mention my walk with God.

So, with all that said from here on out I'm not only going to be talking about my writing life and my books but also what its like to be a seventeen year old in college, my college group, TV shows, God, books, and movies and whatever else comes to mind. Be prepared! This season of Melody's Musings is going to be a bit of a roller coaster but I hope you enjoy the ride along with me.

OK, now that all of that boring stuff is out of the way that's get to the rich center of this post. I have a confession to make. Don't laugh OK?! But I love Disney Channel original movies. Yes, I've watched all three High School Musicals several times along with pretty much every other original movie that's ever come out. 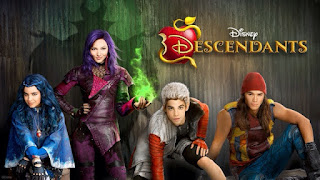 Don't ask me what attracts me to them so much because I honestly have no idea why I enjoy them so much other than the fact that their usually funny, and just enjoyable in general to watch. So, if you don't know the movie Descendants came out which is a Disney Channel original movie about the children of four villains. There's Mal (Maleficent daughter), Evie (The Evil Queen's daughter), Jay (Jafar's son) and Carlos (Cruella de Vill's son). First off I find their names and how they all relate to their parent's names sort of funny but that's not exactly what I enjoyed so much about this movie. I loved the music, especially the songs Rotten to the Core and If Only (I got a riot out of the song Did I Mention where beauty and the beast's son sings his undying love for a certain pretty villain) and yes the acting and plot is a bit cheesy but who doesn't love some cheesy from time to time?

What really got me though are the characters. Not only is the whole movie fun, hilarious and a great twist to fairytales but the character's are good in themselves. They each had their big important scenes that really showed how their parent's influenced them in a rather negative way.

Mal's mother is bent on world domination and all Mal wants to do is make her mother proud, to follow in her footsteps and get her mother's approval. Throughout the whole movie you see Mal constantly striving to stay like her mother, cold, hard and rotten to the core. Jay, Jafar's son, is a thief and he grew up believing that there is no "team in I". In other words you have to look out for yourself and teams are dumb and pointless and anyone that gets in your way needs to be pulverized. Evie's mother, being the Evil Queen is obsessed with her looks and getting her daughter to become the fairest of them all. Evie is shallow and obsessed with her outward appearance and getting a prince and a big castle. Nothing else really matters. She may look evil on the outside but she's a beautiful, smart, princess on the inside. And then there's Carlos who I thought was just thoroughly hilarious. His mother taught me that dogs are vicious pack animals that will rip your throat out and kill you so when a little dog comes running at him he bolts and climbs a tree and that was honestly one of my favorite scenes.

But at the heart of the movie are four misunderstood kids who want to fit in and be the good guys. Jay learns that having a team can be good, Carlos conquers his fears and Evie learns cliché much? that looks are all that matters. Overall, it was a great movie with lots of fairytale twists like the kids of villains being booted off to the Isle of the Lost and the children of the princesses and princes and their sidekicks going to a royal academy.

If you enjoy a good laugh and a movie that will put a smile on your face you would like Descendants. Plus, I am not ashamed to say that I love their clothes and Carlo's hair.

So there! That is my confession! I liked Descendants more than a seventeen year old should but now I hope that you go and watch it now too.

Do you any of you have any favorite Disney Channel original movies? I'd love to hear about them! (And don't me ashamed to tell me that you loved High School Musical too because I know there has to be others out there!)