July 30, 2015
This week I'll be talking about sidekicks that come in all shapes and sizes and personalities. I think that some of the most well known sidekicks are the ones that star in Disney princess movies. There's Pascal from Tangled, Flounder from The Little Mermaid, Raja from Aladdin (and Abu) and let's not forget the latest two sidekicks to show up in a princess movie, Olaf the snowman, and Sven the reindeer. 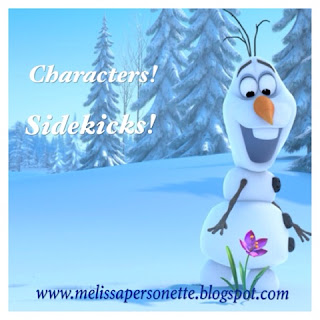 But what makes such a great sidekick? The fact that they have their own unique personality. A sidekick is supposed to be there to support the protagonist during her hardest and happiest moments and the only way for that character to stand out and be there for main character is to be different and special in her/his unique way. They also have to have their own goal and motivation because at the end of the day their the heroes of their own stories, not just a supporting character for someone else's life.

What I want to get into though isn't the perfect formula for a sidekick (if there is one please feel free to tell me in the comments because man would that be great!) its how some supporting characters have become walking, talking clichés. I think you know what I'm talking about. The spunky best friend who's out going and the complete opposite of your protagonist, or the openly gay best friend (who could also be a huge twist in the middle of the story by openly sharing that he/she is gay). Those are two that I see the most and two that I can not stand. Not only do these characters sometimes feel forced but also cardboard because their the go too stereotypes.

When I pick up a book I don't want to read about stereotypical spunky or gay (or both) best friends who follows the main character around. I want to see some diversity. I want to see the bratty ultra popular cheerleader be the protagonist's bestie or "sidekick" or maybe have the jock of the football team or the nerd from chess club or the shy bookworm girl. The ideas are infinite and are different from genre to genre. So, when you sit down to brainstorm for supporting characters try and make them different, unique and diverse with a goal for their life and motivation to help to move them toward that goal. To tell the truth I'll be taking my own advise as well and challenging myself to come up with some interesting and different supporting characters.