Over the next few weeks I'm gonna talk about characters from the strong, independent women to the dark, dangerous, and brooding hero.

I've decided to kick off Character Month by talking about Independent Female Characters since Independence Day is on Saturday. For a few years now strong and independent female characters have taken many genres by storm but I think most of them are all clustered in the Young Adult genre. To me there are two different ways to classify the strong female character. There's the cliché way and the realistic way. 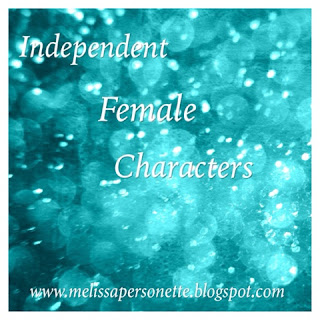 But here's the realistic way to view a strong female character. There are so many different personalities in this world and so if the world were to collapse and turn into a dystopia or (heaven forbid) the zombie apocalypse actually happened there would be those that run around screaming and cowering (namely me) and those that grab a shot gun and do something about it.

(Me during the apocalypse)
Just like in this world where everyone has their own preferences there should also a diversity in books too. I want to see female characters that wear skirts and sit in front of a mirror for an hour doing her makeup. I want to see the shy bookworm female character that stutters and doesn't have the courage to talk to a boy. Or the goth skater girl who won't take no for an answer and can do anything that a boy can do because that's normal and realistic. Not everyone is cut out to be the tough kick-butt girl who saves the world from total destruction and that is perfectly ok. I know for a fact that I would not be that girl and I'm ok with that.

So, I guess what I'm trying to say is that there should be no such thing as the strong female character because we are all strong in our own way and every female character in every book is strong in her own way. She has her strengths and her weaknesses, her own preferences and her own personality. This may sound cheesy but all female characters are heroines whether she loves getting in the dirt and catching bugs or wearing skirts and sipping coffee in a café.