July 13, 2015
Sorry this is so late! I was at my grandparents all weekend and thought I would have time to put this up on Thursday... Guess I was wrong. So! Here it is now!

This is the second weak of my A Month of Characters. You can check out my post on Characters! Independent Female Characters from last week. This week I'm going to ramble a little bit on The Dark, Dangerous, and Brooding Male Character that is usually the love interest for the feisty heroine. 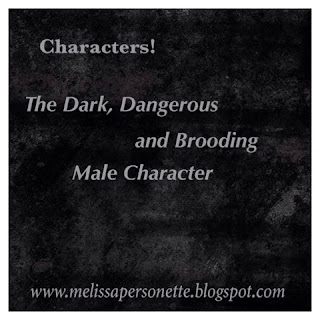 Now to be honest I do fall in love the bad boy in any story...

Something about them is so alluring which is probably why the female character falls for them too at some point. But that doesn't excuse the huge cliché that they've become. Sure some of the dark, dangerous, and brooding male characters can have nice traits like being sensitive or kind like Edward but they still all follow pretty much the same formula.

To prove that I did my homework by checking out my library of books on my shelf and Kindle and what I came up with is pretty straight forward. Books with female main characters almost always have a love interest if its in the Young Adult genre and a lot of them have the same sort of male love interest. Most of them are as I've said dark, dangerous, and brooding along with drop-dead gorgeous, over-confidant and on some occasions total over-protective jerks. To prove my point here's a list of love interests that I'm referring to:

If you've read two or more of these books I think you know what I mean. Cole and Morpheus are complete annoying, hot jerks that somehow is able to worm their way into the heroine's heart while the rest are all over-confidant in one way or another and either dark, dangerous, or brooding or all three!

Please tell me I'm not the only one who feels a little weirded out by this unsaid formula for the heroine's love interest hero. I'm sick of seeing all these guys that more or less come down to the exact same factors. Sure they may have different quirks or talents but nonetheless they all have more than one thing in common. Just look at Jace and Edward! They both play the piano!

Just like with creating authentic and realistic female characters there should be some more diversity. Mainly I see a lot more diverse male characters in the Middle Grade section and Young Adult contemporary though not always. That doesn't excuse though that are dozens of different personalities for girls so why shouldn't there be for boys too? Not all guys are the drop-dead gorgeous, over-confidant tormented type. I know a lot of guys and I don't think I've ever met one like that though the Young Adult genre would have you believe that there about a billion dudes like that in the world.

What I would like to see is a cute shy boy who doesn't talk much and is sensitive or the nerd with glasses that has plenty of charm and loves Star Wars and Star Trek. I wouldn't mind even seeing a few more stereotypical jocks that's a geek to his core. There are so many different quirks and traits and personalities out there that there's no way every hero should be even remotely the same!

Not to mention all of these dudes have some sort of unique ability and/or power that makes them dangerous and different from the heroine. Edward's a vampire, Jace is a shadowhunter, Four from Divergent is a tough leader of the Dauntless and is super strong. What I would like to see is the opposite. I want to see the hero meet a heroine with the powers and the wisdom that sets her apart from the rest of the world or have them already know that their the same species or have the same power or whatever. Shannon Messenger does the whole heroine has the power and wisdom thing in her Let the Sky Fall book which I think was one of the reasons why that was so fresh and new. I guess what I'm trying to say is that maybe instead of following the same formula of dark, dangerous, and brooding with a sprinkle of confidence and a cup of hotness for our male heroes we should try changing things up a little and putting a spin on the old clichés.

What do you think of the Dark, Dangerous, and Brooding Male Characters? Do you have any other examples of these sort of bad boy/roguish characters?