June 04, 2015
Just a week ago I went to go see Tomorrowland with my brothers and a friend. I had looked up reviews and seen that a lot of people didn't like it so I knew what I was getting myself into. I figured it would just be a fun movie full of cool CGI and some fun action parts. What I got was a bit disappointing. Now I love flashbacks and backstory. 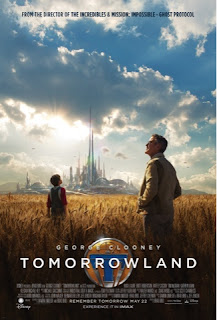 It's one of my favorite things to read and watch because to see a characters backstory is to see into their most private thoughts and memories. Anyways, the movie started out with a very large flashback of Frank's journey to Tomorrowland when he was a kid. So mostly the beginning and the middle was solid, fun, (a little too violent), but over all enjoyable. The ending though... was a huge let down. As writers we all know that there needs to be a great, satisfying ending that will leave our readers sighing and wanting more. Tomorrowland... did not have that ending.

I won't say anymore because I don't want to spoil it for anyone. What I will say though is what I didn't like and what I did. I didn't like the climax (as I said), I didn't like that the movie was a little too preachy. The villain spewed out a speech about how the world is too obsessed with dystopian genres and destruction and war and so forth. There was also too much violence. I mean they were just fighting robots but the robots looked like real people and were getting all dismembered and disfigured and it was actually pretty gross.

What I did like about the movie though is that it inspired something inside of me. Sure they preached about how people need to see the future as a brighter place but there is some truth in that. In the flashback when Frank was at the... World Fair I believe in the late 1900's when there were buses and automobiles that scene made me realize something. Back then people were excited about the future. They saw flying cars, jet packs, shiny guns that go pew-pew. The future to them was supposed to be full of hope and amazement. That view is all but extinct now adays.

Don't get me wrong I love the dystopian genre and everything that it stands for and that it is but I think its possible that maybe we've lost sight of that thrilling concept of a great future. Do people still believe that the future could be full of flying cars, shiny buildings, helpful robots or jet packs? I don't think so. A lot of people think of the future as something to be afraid of. A place of war and horrible things.

Tomorrowland made me realize that yes the dystopian genre is great and has its own pros and cons but is that all we're seeing? Is corrupt governments, nuclear war, or environmental collapse? I for one don't want a future like that. I would much rather grow up to have jetpacks and super fast speeder trains that float in the sky.

I'd better stop now before this ends up being a way to long rant about how everyone needs to think more positive. But as a writer Tomorrowland got me thinking of something new and different. Of not necessarily a Utopian world but a world where the future is bright and full of inspiring new things.