February 26, 2015
William Cloud was nice enough to share his thoughts on what the Superhero genre is. 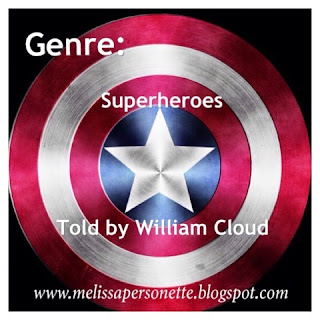 You can find his blog at:
William Cloud's Blog
Okay, what’s the first thing that comes to your mind when I say “superhero”? Probably Captain America, or Superman. According to Merriam-Webster, a superhero is “a fictional character who has amazing powers, or a very heroic person.” So, while Clark Kent and Steve Rogers (whoops, did I just spill someone’s secret identity?) fit that, they ought not determine an author’s idea of a superhero. Today, I am going to talk to you about how to write superheroes. How to create the character, how to have them work within a world, and how their character can develop. I’ll start with creating a character.

So, you basically have three things to deal with when you make a superhero: powers, costume, and identity. Now, what sort of powers are we talking about here? This is such a vague term, and can go anywhere from extra-sensory perception to flight to being able to supernova (Yes, Superman can do that too...show-off.). Really, it’s up to you, as with all of these, to decide how powerful your hero is. Do you want someone nigh invincible, or perhaps a hero that’s more tangible, more human?  I’ve often written characters with nothing more than extreme physical abilities, and extra-sensory perception. I’ve made them just enough to be un-human, but not so that they can’t be beaten. Just keep that in mind with your character. Also, where did their powers come from? Are they built, are they natural, or are they the result of an accident?Now, with great power comes great costumes! Now, most people now-a-days wouldn’t dress up in tights and sparkly costumes, but, you never know! Again, a lot of what a character wears is based on time period (anyone for a Renaissance superhero?), wealth, and powers. Tony Stark has no powers, but a lot of money, and a lot of technology. He is able to build a suit that has powers. Superman, on the other hand, has a suit from his home planet (so it looks really odd. Underwear on the outside of your pants...really?). Now, you have powers and a costume, or lack there-of, but...what do you call your character? Remember that the news, or the populace of your world are likely going to be naming this hero, so think like a reporter. What would make a good headline? What is going to catch the eye of the general public? Is this hero a person that the people look up to, or do they hate him? Or, is this hero one of the few egotistical maniacs who name themselves? It is all up to you, and what you want to do with the story.

Now, you have powers, you have costumes, but, how does your character work in the world you’ve created around them? Now, there really is no limit or restriction on what time, what place, or even what planet your hero lives on. Now, you obviously don’t want a hero that uses computers to exist in ancient Greece. Or do you? Really, the possibilities are endless in this regard. However, will your character be loved? Hated? Will anyone even know they exist? Does anyone know of their true identity? Are they like Iron Man, where it’s extremely clear that Stark is the man in the suit? Or are you dealing with a Batman, a dark vigilante who hides at all costs, and only reveals his true identity to a select few? Does anyone know about them? Do they have villains of equal strength? Remember, every protagonist needs an antagonist. Now, that may be themselves, but, in the case of a superhero, they really need some other person to beat up, and rescue the girl from. Now, supervillains can be treated the same way as heroes, just don’t forget to make them evil. Does your hero, or heroine have a love interest? A father figure? Parents? Probably no parents, but, that would be interesting.
There are simply three types of character arcs for heroes. The down-home, All-American guy who gets his powers, and fights for truth, justice, and the American way? Are they the outcasts who are either born or gain their powers through some accident, then try to find a place in the world, or are they the ones who were hurt, the ones who would be a villain, but chose to fight for good? Or, are they Iron Man? Seriously, he’s his own bracket. Brash, bold, flamboyant, and a general pain in the rear until something changes, till something makes them become responsible. Now, these are just basic archetypes. There are infinite potentialities for the character arc of your hero.
Now, what have I really told you? Not much. Hopefully, I given you some questions and ideas that will spark your creative juices and give you a kick-start in your story. As I depart, let me leave you with this: superheroes are the mythology of our day. Greece had Hercules. Scandinavia had Thor. We have Superman. This is the age of heroes. Make your hero legend, not only to the characters in your story, but to your readers. I challenge you to create a legend, a part of an ever-growing mythos. In the words of one of the greatest hero authors of all time, “Excelsior!”

What do you think of the superhero genre? Know of any good superhero books that you'd like to share?